A jubiliant Pascal Donohoe of Fine Gael celebrates at the RDS Count Centre with family and supporters following his re-election to the Dáil for the constituency of Dublin Central. Video: Bryan O'Brien 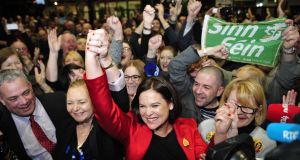 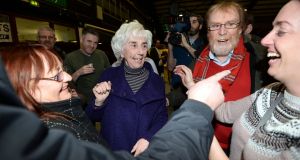 Against all expectations based on the tallies, Independent TD Maureen O’Sullivan survived the 11th count in Dublin Central to retain her seat.

She joined a very relieved Minister for Transport Paschal Donohoe who also managed to retain his seat in a hard-fought contest after the constituency dropped from four to three seats.

Mr Donohoe said he was humbled at the result and felt “absolutely vindicated” in his decision not to move to Dublin North-West, following the change in constituency boundaries.

He described his election team as the “best in Dublin, possibly in all Ireland”.

Gerry Gannon of the Social Democrats lost out narrowly.

Labour’s Joe Costello did not retain his seat and said he believed Labour would not go back into government now and that it needed to regroup.

He also said he had full confidence in party leader Joan Burton.

Asked what went wrong for Labour during the election campaign, he replied:

“When we made the decision to go into government, we made some very harsh decisions but we did that knowing full well that it was in the interests of the country.”

But Mr Costello admitted that the electorate had punished Labour for those decisions. “I would be very surprised if Labour was to go into the coming government.”

Asked about the Labour leadership under Joan Burton with the party now looking to return only single digit numbers in TDs, he answered:

“That’s a matter for down the road. But for the present time, it’s about reflecting on what happened for ourselves.”

Ms McDonald said the outcome from the electorate was that “they’ve sacked Fine Gael and Labour”.

“The second conclusion is that politics here has changed. The old tweedledum and tweedledee between Fianna Fáil and Fine Gael is now over.

“Politics is much more diverse. I think that’s a really healthy thing.”

She said “this is a whole new scenario. I don’t think there’s any harm in that at all.”