Blueprint was drawn up by former US diplomat Richard Haass 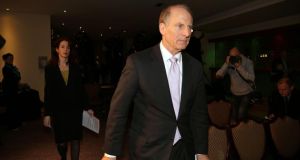 Northern Ireland’s political leaders have published a draft agreement on outstanding peace process issues only hours after parties failed to reach consensus on the proposals.

The stalled blueprint for dealing with divisive problems around flags, parades and the legacy of the Troubles was drawn up by former US diplomat Richard Haass, who chaired a six-month five-party talks process that ended at 5am this morning without a settlement.

Democratic Unionist First Minister Peter Robinson and Sinn Féin Deputy First Minister Martin McGuinness, who had commissioned the one-time White House special envoy to oversee the negotiations, put the document on the website of their joint office so people could assess the plans for themselves.

While Dr Haass did not meet his end-of-year deadline to achieve consensus on the long running disputes, his draft agreement could yet form the basis for a deal. The two nationalist parties — Sinn Féin and SDLP — have signalled a willingness to back his proposals.

The DUP and Ulster Unionists have acknowledged progress has been made and have pledged to take the document back for consultation with their respective party executives, but both have expressed major concerns about details of the paper as it stands.

The Alliance Party said it would endorse the document’s proposals on the past, but rejected the suggested resolutions on flags and parades in their current form.

The parties are now set to establish a Stormont working group to try and finally reach an accommodation in 2014. But without the direction of such an experienced independent chair and with elections looming in May, some fear the window of opportunity may have passed.

Before flying home to the United States, Dr Haass had urged Mr Robinson and Mr McGuinness to publish the document. “We believe that when this happens it will receive and enjoy considerable public support and it will help contribute to an already robust debate that is taking place in Northern Ireland about its past, its present and its future,” he said early this morning.

Taoiseach Enda Kenny and British prime minister David Cameron have described the failure of the parties to reach agreement as “disappointing”.

Dr Haass had urged Mr Robinson and Mr McGuinness to publish the document. He believed it would command “considerable public support” and ultimately be a “foundation stone” for an agreement.

He also called on the parties to establish a working group to address outstanding problems which are mainly over parading and the past. He also made clear that while he and his colleague Professor Meghan O’Sullivan at some future stage might return to assist the parties sign off on a deal, they were now detaching themselves from the process.

“Success should not be measured by what we report to you tonight or what the party leaders report tonight - I would ask you to judge the success in six months, in a year, 18 months, in two years, that would give a much more realistic definition or yardstick of what constitutes success,” he said. “What I believe what we have done is laid down solid enough foundations stones.”

Sinn Féin endorsed the 40-page paper while the SDLP anticipated the party would give it “general endorsement”.

Sinn Féin president Gerry Adams said that the party was disappointed in certain areas but its negotiating team would recommend acceptance of the document.

“Sinn Féin have a track record in negotiations of making agreements and honouring them. Tonight is a significant step forward. It is important that all of the parties and the two governments honour what has been agreed,” he said.

However the DUP, whose support probably would have ensured overall if qualified acceptance of the document, said that the paper needed “further refinement”.

The DUP’s chief negotiator, Lagan Valley MP Jeffrey Donaldson, said progress was made but a final deal could not be struck. He said the “broad architecture” of Dr Haass’s paper contained “much merit” but some of the language and detail “was not what we would have chosen and in some instances we profoundly disapprove of the language”.

“We entered this process to come to the right deal, to get the right deal for the people of Northern Ireland, but not any deal,” Mr Donaldson said in a 6.30am press conference.

“We do not have agreement but we are committed to continuing this work beyond now in dialogue with others to try and resolve the outstanding issues that need to be addressed,” he added.

The Ulster Unionist Party, which also expressed misgivings about elements of the proposals, decided to reserve judgment until the paper is presented to its 120-member executive in the coming days. Alliance had concerns over the proposal relating to parades and flags but was generally supportive of the methodology for addressing the past.

Dr Haass and Dr O’Sullivan attempted to put a positive gloss on the result of the process which began last July when they were invited by Mr Robinson and Mr McGuinness to help the parties reach agreement on these so far intractable problems.

Dr Haass said a final agreement was “not there” but there had been “significant” progress. ”All the parties support significant parts of the agreement. At the same time, all have some concerns.”

SDLP leader Dr Alasdair McDonnell said his party would be relentless in building on the strengths of the document and “remedying” where it was less strong. “A general endorsement from my party will send out a strong and clear message that much good work has been done through Haass and that the SDLP is determined to build on and deepen that work into the future,” he added.

Alliance leader David Ford said: “While certain parts of this agreement will be welcomed by the public, other areas fall far short of what should have been achieved. This is certainly not the comprehensive agreement that we entered these talks to achieve.”

Mr Kenny said the outcome was a disappointment not only to him, but to the people of Northern Ireland. “It should be said that significant effort went into the talks. I hope that the period ahead can be used to build on that effort, and provide a basis for a future agreement,” he said. “I urge all the political parties in Northern Ireland to reflect on the progress that had been achieved.

In a statement this morning, Tánaiste Eamon Gilmore said he too was disappointed that agreement was not reached. “This is not a step back but rather a step not yet taken. That step forward will have to be taken because it is right and necessary and because people across society are demanding it,” he said. “I recognise that significant progress has been made over a short period on the most difficult and contentious issues that face society in Northern Ireland. The progress that has been made must now be safeguarded and built upon.”

Mr Cameron also said the failure to achieve a breakthrough was disappointing, but urged the parties to “keep going” in the process.

“Although it is disappointing the parties have not been able to reach full agreement at this stage, these talks have achieved much common ground, providing a basis for continuing discussions,” he said. “There is a shared commitment to making progress on these very difficult issues that continue to be a focus for tension and division across the community.”

Northern Ireland Secretary Theresa Villiers said the failure to reach a comprehensive agreement should not be seen as the end of the road in seeking to find a way forward on difficult and divisive issues. Significant progress has been made and it is important to build on this and continue to seek agreement in areas that continue to be a focus for tension and division within society.

“I welcome the suggestion by Dr Haass that the parties should now lose no time in getting together to see how they can most constructively take things forward,” she said. “ I would encourage them to maintain the momentum that their efforts, working with the Haass team, has created. For our part, the UK Government will look at how we can best facilitate this.”

Having been given an end-of-year deadline to report, Dr Haass had aimed to strike a deal before Christmas but had to return to the US on Christmas Eve empty-handed after a marathon session of all-night negotiations last week. Cutting short his seasonal break, he returned to the region on Saturday in a last-ditch bid to secure agreement.

Dr Haass is the president of US think tank the Council on Foreign Relations, based in New York, and was US president George W Bush’s special envoy to Northern Ireland from 2001 to 2003.