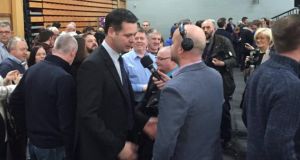 Sinn Féin TD Pearse Doherty is interviewed after his re-election to the Dáil for the Donegal constituency. Photograph: Gerry Moriarty. 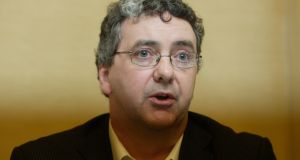 Fianna Fáil experienced a return to fortune in Donegal by winning two of the constituency’s five seats via outgoing TD Charlie McConalogue and former minister and MEP Pat ‘the Cope’ Gallagher.

The seat came at the expense of Sinn Féin, which now has one deputy rather than two, with Pádraig Mac Lochlainn losing narrowly to outgoing Independent socialist TD Thomas Pringle.

Mr McConalogue, from Inishowen, topped the poll and was elected on the first count on Saturday. Mr Gallagher and Minister of State at the Department of the Gaeltacht Joe McHugh for Fine Gael were elected on Sunday on the 11th count.

Throughout the night it was clear that Fianna Fáil would win two seats and that Fine Gael and Sinn Féin would take one each. But the fortunes of Mr Mac Lochlainn and Mr Pringle see-sawed with the independent socialist, himself a former member of Sinn Fein, edging out Mr Mac Lochlainn.

Mr Pringle’s supporters who included independent Derry councillor Gary Donnelly, a member of the Thirty Two County Sovereignty Movement which is linked to the Real IRA, cheered and raised Mr Pringle aloft after the result was formally announced around 9pm.

Mr Pringle congratulated Mr Mac Lochlainn on the “gracious” manner in which he accepted his defeat. He said he welcomed Mr Donnelly and other independent Derry councillors who had attended the count centre.

He said he did not know that Mr Donnelly was a member of the dissident republican group, the 32 County Sovereignty Movement. “I know the political work that he does. I do know he is committed to independent politics and that’s the key thing for me,” he said.

Mr Donnelly said he was there as an independent councillor to support Mr Pringle and that his links to the 32 County Sovereignty Movement were “irrelevant”.

“I am here as an independent councillor because I believe the independent model is the way forward,” he said.

On the eleventh count with the distribution of independent candidate Tim Jackson’s 5,864 votes Mr Gallagher and Mr McHugh were elected.

There was high drama as to who would win the final seat. After the 11th count there were just 74 votes between Mr Mac Lochlainn and Mr Pringle, with the Sinn Féin man narrowly ahead.

By the 12th count, after the 920 surplus votes of Mr Gallagher were transferred, there were only 36 votes between the two. When Mr McHugh’s transfers were distributed Mr Pringle’s lead increased to 184 votes.

There was speculation that Sinn Féin would seek a recount but in the end Mr Mac Lochlainn conceded defeat.

It was clear from late on Saturday night that the contest for the final seat would be very tight. On Sunday afternoon the returning officer Geraldine O’Connor agreed to a Sinn Féin request for a recount of the votes of two of the candidates, Gary Doherty of Sinn Féin and independent candidate Dessie Shiels.

Ms O’Connor very early on Sunday morning had agreed to another Sinn Féin request for a recheck of votes cast for two of the Sinn Féin candidates, Pearse Doherty and Gary Doherty and of Mr Shiels.

Gary Doherty had been eliminated on the seventh count just seven votes behind Mr Shiels. Sinn Féin was anxious to try to keep Gary Doherty in the contest in order to boost Mr Mac Lochlainn’s chance of benefitting from his transfers, when he was eliminated, and of holding the seat against the challenge from outgoing independent TD Thomas Pringle. On the thirteenth count Mr Pringle emerged as the victor.