Doherty and McDonald out front as SF seeks Adams successor 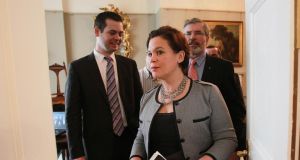 Sometime about 2005, when there was a spike in support for Sinn Féin in opinion polls, the possibility of a coalition arrangement with Fianna Fáil was canvassed in the media. When asked about it at a doorstep interview, then taoiseach Bertie Ahern did not dismiss it out of hand but suggested it was an event that might occur only in the distant future.

He said Sinn Féin was at that same stage in the mid-2000s that Sinn Féin the Workers’ Party had been at in the early 1980s. The conclusion was obvious – Sinn Féin was on a journey but its destination was two decades away.

Almost 10 years later the Rubicon has not yet been crossed. But while other parties will publicly baulk at the prospect of a coalition with Sinn Féin, the possibility is no longer ruled out with finality.

For now, the political reality is that it will be unlikely for Sinn Féin to be in a coalition in the 32nd Dáil from 2016. Unlikely but not impossible.

Going nowhere fast
For three years in the last Dáil (between 2007 and 2010), Sinn Féin was going nowhere fast. Its four TDs were making little impact. Its policy corpus in the Republic was weak, especially in finance. Two events happened in quick succession that put a wind behind the party in the run-up to the February 2011 election.

The first was Pearse Doherty’s high-octane byelection win in Donegal South-West, which electrified the party and boosted its morale. The second was the implosion of the coalition. The party won 14 seats. The arrival of Gerry Adams and Mary Lou McDonald into the Dáil signalled it would be a more formidable adversary for rivals.

The results also reflected some step-changes in attitude among voters to Sinn Féin. It attracted transfers in far greater numbers than previously.

The toxicity of Fianna Fáil was a factor but the likes of Sandra McLellan in Cork East, Peadar Tóibín in Meath West and Brian Stanley in Laois-Offaly demonstrated voters were no longer averse to transfer lower preferences to Sinn Féin candidates.

The long-term project for Sinn Féin – even though its dominant personalities will cavil about whether it is the case – is one of ministering, a gradual move towards the left of the centre. The aspiration is that in a generation its violent past will be diluted to a tinge – what the Civil War is to Fianna Fáil and Fine Gael.

Other parties see Adams – and the cloying sentimentality of some of his Dáil speeches – as a liability, arguing that he doesn’t get the Republic. That may be a beltway view, not shared beyond the confines of Leinster House. To be reductionist about it, he’s a huge “brand” for Sinn Féin. He arrived into Louth in 2011 and 15,000 voted for him, underlining that appeal.

Given the massive symbolic significance of the 1916 centenary there is no doubt Adams will lead the party into the next election. Beyond 2016, there is a leadership quandary.

The party has had two dominant personalities, Adams and Martin McGuinness, for three decades. There is an obvious comparison with the SDLP and its struggles after John Hume and Seamus Mallon left the pitch. The succession will present difficulties and, even though the party will prepare for it, it’s inevitable there will be a vacuum. There are differences between the northern and southern wings of the party and the new leader will have to have cross-Border appeal.

Of the prominent Northern politicians, the likes of Conor Murphy and John O’Dowd spring to mind, though neither is a household name in the Republic. O’Dowd, Minister for Education in the Northern Ireland Executive, has been an impressive performer and is highly regarded after he stood in as Deputy First Minister when McGuinness ran in the presidential election in 2011.

Two in the frame
Adams has said on record that the next leader should be from the Republic. That puts two in the frame: McDonald and Doherty. There are few politicians who impress TDs from rival parties more than McDonald. She is a great communicator, authoritative and focused, though at times too obdurate. She can sometimes be caught out on detail.

McDonald is deputy leader, a woman, who is also well got with the party’s key leaders in Northern Ireland. That makes her the front-runner.

Doherty is in command of his finance brief. He has softened his edges too, moving away from his always-angry, always-shouting image.

There are other undertows. If the party is to be a substantial force it needs to broaden its base beyond republicans and a predominantly young male support base in poorer areas. The very low turnout of that demographic explains why the party always performs better in opinion polls than in elections.

Its finance policies under Doherty are now less cloud-cuckoo land. Its decision to back a Yes vote in the Seanad referendum was also significant although it caused major internal division, with McDonald in particular opposed. It’s no accident that the party attacks Fianna Fáil as often as it does the Government – a strong recovery by Fianna Fáil will undoubtedly impact on Sinn Féin.

While Sinn Féin has reached support levels of more than 20 per cent in polls since 2011, its true position is probably a few points shy of that. Even in the high teens, that support would translate into more than 20 seats in the next election. As to the increasing reach of the party, next year’s local elections will tell a tale.