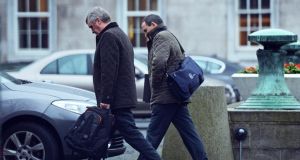 The Department of Environment took up to three months to approve €180 million in establishment costs, which included estimated spending on consultants, for Irish Water.

The Oireachtas environment committee also heard this afternoon that the department queried the costs, including spending on consultants, but ultimately allowed them.

Irish Water chief executive John Tierney and other senior managers at the new semi-state appeared before the committee today to address public concerns over spending levels.

Briefing documents provided in advance of the meeting revealed Irish Water will spend €85 million on consultancy and external contracts by the middle of next year.

However, Mr Tierney said he never spoke directly to Minister for he Environment Phil Hogan about the costs.

Mr Tierney said Bord Gáis, Irish Water’s parent company, made the Government aware of the need for external consultants from the beginning.

“Ever since the outset of Bord Gais’s submission, they were clear on the necessity to do this,” Mr Tierney said.

He also said spending was needed to establish the company, and would only be incurred by any water company once every 20 years.

The briefing document also shows Irish Water told the Department of Environment in September 2012 it would need €180 million in establishment costs.

Between September and November, the department submitted “queries on budget breakdown, substantiation of items, and queries on procurement process for external consultancies were all dealt with”.

Mr Tierney also said he could “absolutely” say as a fact that Irish Water could not have simply relied on Board Gáis’s existing resources. He stressed that outside consultants were needed.

McCann Fitzgerald solicitors will get €970,000 and A&L Goodbody will receive €2.9 million. KPMG will get €2.2 million, while the briefing document also says another €13.3 million is “ covered by another 18 contractors who were procured”.

Irish Water and its oversight body, the Commission for Energy Regulation, are facing mounting pressure to explain how the new semi-State body spent such a large amount on outside consultancy fees.

Mr Tierney will appear tomorrow before the Public Accounts Committee to explain and justify the costs behind the organisation.