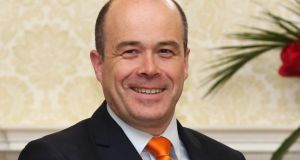 Minister for Communications, Climate Change and Natural Resources Denis Naughten: “We have an overdependency on imported fuels. Wind farms will play a part in reducing that dependency. Photograph: Colin Keegan, Collins Dublin

The new Minister for Communications and Climate Change, Denis Naughten, has emphasised that wind energy will play an important part as a solution to rising emissions.

“We have an overdependency on imported fuels. Wind farms will play a part in reducing that dependency,” he said yesterday.

Mr Naughten had said on Saturday, his first day back in his Roscommon-Galway constituency as a senior Government Minister, that he recognised some people objected to wind farms and wind turbines and he wanted to see more consultation on the issue.

However, he said yesterday his comments did not depart in any way from the commitments of the new programme for government to update wind farm planning guidelines within three to six months of taking office.

The outgoing government delayed publishing the revised guidelines due to an internal row on the minimum distance between turbines and the nearest dwelling.

“We need to strike a proper balance [between the energy source and the rights of communities who live near planned wind farms],” he said.

“There are issues regarding the guidelines that need to be updated. I am not going to allow any further delays.”

Mr Naughten, one of the Independent rural TDs to support the Fine Gael led minority Government, said the fact that climate change formed part of the title of his office underscored how “vital” a priority it was for the Government.

“How can we work together to ensure these companies drive change on climate change in a way that will lower emissions and also create additional jobs? There is potential there if it is done properly.”

On the Communications side of his remit, Mr Naughten emphasised the importance of making broadband available to all communities by saying it was his first, second and third priority.

“I will work very closely with Minister for Rural Affairs Heather Humphreys to ensure we deliver high speed broadband to provincial towns and rural Ireland. Both of us are determined to address the broadband deficiency,” he said.

“Wind is the cheapest zero carbon energy supply. Yes, we need to focus on solar. Yes, we have to be careful on planning. That does not mean that we turn away from the most competitive clean energy supply we have.”

Friends of the Earth director Oisín Coghlan also suggested that consultation on wind farms should not be the priority. “What’s really needed now is concrete measures to support communities who want to develop their own energy projects – whether that’s wind, solar or bioenergy.

“At a time when we have to reduce emissions, renewables now provide 23 per cent of our power with zero pollution. By contrast, peat provides less than 9 per cent of our electricity but produces 27 per cent of the climate pollution from power generation.”

At his homecoming, Mr Naughten told supporters the programme for government had “Roscommon-Galway written all over it”. “We want to ensure that we get a fair share of the cake.”