Defeated TDs count the cost of rejection by voters 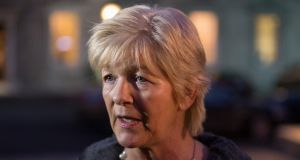 Defeated Labour TD Anne Ferris: “Losing your seat is a blow to your self-confidence. I have now joined the ranks of the unemployed and I am hoping something will turn up.’’ Photograph: Fergal Phillips

“We were still getting telephone calls and people were arriving at the office, not realising that it would have to be closed because I was no longer a TD,’’ she said.

Like other TDs who lost their seats, Ms Ferris is coming to terms with major changes to her life. Bills incurred in running a campaign have to be paid, she must look for a new job, consider if she will run for public office again, and face the psychological fallout following her rejection by voters.

“Losing your seat is a blow to your self-confidence,’’ she said. “I have now joined the ranks of the unemployed and I am hoping something will turn up.’’

She was conscious, she said, others working for her were also unemployed. “There is the human dimension of mortgages to be paid and so on,’’ she said.

Ms Ferris worked for many years as personal assistant to the former Labour TD for the constituency, Liz McManus, so her involvement in politics stretched much further back than when she won a Dáil seat in 2011.

She said Wicklow now had no Labour public representative, at national and local level, despite a party tradition going back decades. She added she may seek a nomination to contest the next local elections, having previously served on Wicklow County Council and Bray Town Council.

Ms Ferris said Labour should rebuild in opposition, with Tánaiste and party leader Joan Burton stepping aside in favour of Minister for Public Expenditure Brendan Howlin.

“We need a new leader and, because we have just seven TDs, there is no requirement to have a deputy leader,’’ she added. “We need new people and fresh thinking.’’

Fine Gael’s Frank Feighan, who lost his seat in Roscommon-Galway, was elected to Roscommon County Council in 1999, the Seanad in 2002 and the Dáil in 2007.

The controversy surrounding services in Roscommon hospital placed him under huge pressure during the last Dáil.

“I was a bit hurt by it,’’ he said. “But now I feel vindicated by what has happened in the hospital since.’’

He said he had “a fair idea’’ for the past three years he would not be re-elected.

Before entering politics, he had business interests, which included a newsagents and bar and restaurant in Boyle.

His concentration on politics meant the end of his businesses and he is now looking for a job.

“At one stage, I had four offices in the constituency, which were funded from my own resources,’’ he said. “You cannot combine business and politics.’’

“People have rung me to thank me for work I did for them, which is reassuring,’’ he said.

He said it was doubtful if he would run for election again, but he did not rule it out. “I do not know what I will do in the future,’’ he added.

There is no return to his Army career for Renua Ireland’s Billy Timmins who lost out in Wicklow, where he was first elected as a Fine Gael TD in 1997, succeeding his father, Godfrey.

“It was a very bruising election and I am taking some time out to decide what I will do in the future,’’ he added. “I must find paid employment.’’

Mr Timmins said he would find it difficult to walk away from politics, but added he might not have any choice in the matter.

He said he had attended a number of Renua meetings, since the election, and he believed the party, with no Dáil representation, had a future if it changed radically.

“The public believed us to be right-wing, cold and lacking in compassion, although that was not the case,’’ he said. “I do not know if I will have a part to play in the party in the long term.’’

“I had experienced the disappointment of defeat before.

“I think us new breed of TDs recognised that longevity in politics was no longer guaranteed.’’

He said he had witnessed in the past the grief of TDs who lost their seats, but he did not feel as badly as they did.

Formerly a pharmaceutical employee, he said there was no job to which he could return. “I am sending out my CV.”