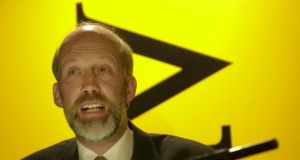 David Ford was the minister of justice from 2010 until earlier this year when Alliance decided not to take up an offer from the DUP and Sinn Féin to hold on to that post. Photograph: Bryan O’Brien/The Irish Times

David Ford is stepping down as leader of the Alliance Party with his successor to be chosen at a special party conference at the end of the month, he has announced.

The South Antrim Assembly member will formally stand down as party leader at noon on Thursday, on the 15th anniversary of his taking over the helm of the centre-ground Alliance Party.

East Belfast MLA and former MP for that constituency Naomi Long, and former Alliance minister for employment and learning Dr Stephen Farry, are viewed as the strongest potential challengers to replace him.

Mr Ford, who is 65, will continue serving as South Antrim MLA.

He was the minister of justice from 2010 until earlier this year when Alliance decided not to take up an offer from the DUP and Sinn Féin to hold on to that post.

“With my 15th anniversary, I felt it the most appropriate time to step aside and pass the reins to a new generation of leadership for the party,” he said on Wednesday.

“Alliance has a well-established new Assembly team, which has hit the ground running by successfully submitting a number of private member’s bills and continuing to provide the effective scrutiny of the Executive others have so far failed to do,” added Mr Ford.

“I am proud to represent the people of South Antrim, who most recently re-elected me for my fifth Assembly term in May, and I will continue to do that in Stormont and in the constituency,” he said.

“Whoever succeeds me as Alliance Leader will be taking over a party on the rise. I am confident they will continue that upwards trend of growing the party, while providing leadership for everyone in our community.”

Mr Ford has been an MLA since the Northern Assembly was formed after the 1998 Belfast Agreement. He succeeded Sean Neeson as party leader in 2001. The party has six Assembly seats when he took over. It now has eight.

Mr Ford is married with four grown-up children. He lives in rural Co Antrim. He stood down as an elder in his local Donegore congregation of the Presbyterian Church in 2013 due to his and his party’s support for same-sex marriage.

The Presbyterian Church has a position of opposing same-sex marriage, while some people at his church also opposed his position.

Mr Ford’s family has attended Second Donegore Church for generations. A former social worker and from a farming background, Mr Ford was born in Kent in England.

His father was Welsh and his mother a Northern Ireland woman.

He spent summer holidays on his uncle’s farm in Gortin, Co Tyrone, moving to Northern Ireland permanently in 1969 just as the Troubles were breaking out. He studied economics at Queen’s University, Belfast where he joined Alliance. He became involved in full-time politics when he was appointed Alliance’s general secretary in 1990.

Mr Ford’s successor will be chosen at a special Alliance Party council on October 26th.

Ms Long who ousted former DUP leader and first minister Peter Robinson from his East Belfast seat in 2010 and Dr Farry, who was minister for employment and learning in the last Northern Executive, appear best placed to succeed him.

However other contenders could emerge in the run up to the vote to replace Mr Ford on October 26th.