Daly to seek support for early vote on abortion 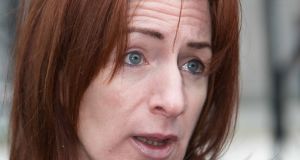 Independent TD Clare Daly, who has brought Private Members’ Bills challenging the ban on abortion in the past, has indicated she will seek cross-party support for a new attempt to force an early referendum.

The Government has indicated it will set up a citizens’ assembly to consider the issue, and yesterday Minister for Children Katherine Zappone said a referendum could be held by the end of next year.

However, it is understood Ms Daly and other pro-choice TDs are likely to bring forward legislation to provide for a referendum long before then.

Taoiseach Enda Kenny has said Fine Gael TDs will have a free vote if and when the Government brings forward its referendum proposal, but a senior Government source indicated there was unlikely to be a free vote on Ms Daly’s Bill – or any other – when it reaches the floor of the House. Other sources said the party had not yet considered the question.

Fianna Fáil sources said its TDs were likely to have a free vote.

Anti-Austerity Alliance TD Ruth Coppinger also told the Taoiseach in the Dáil that her party would bring forward proposals for a referendum.

“We need a referendum to repeal the Eighth Amendment,” Ms Coppinger said.

“If the Government does not move very quickly, the Anti-Austerity Alliance and People Before Profit will introduce a Bill to do so in the autumn, giving organisations and individuals time to lobby deputies intensely to campaign for the passage of the Bill.”

To allow for a referendum, the Oireachtas must pass legislation to provide for putting the question to the people.

The Taoiseach has pledged to establish a citizens’ assembly to consider a number of proposed constitutional reforms and other issues. He has said the question of the strict ban on abortion in the Constitution would be the first matter put before the assembly.

Depending on the recommendations of the assembly, the issue will then be referred to a special all-party committee before the question of any constitutional amendment is considered by the Government and the Dáil.

Mr Kenny has urged caution, saying any immediate proposal to delete the Eighth Amendment from the Constitution without agreement on what might replace it would not be passed.

Many TDs say they favour the legalisation of abortion in cases of fatal foetal abnormality and in some cases of rape. However, there is little evidence of support among many TDs for a broader liberalisation of the law on abortion, as campaigners desire.