Archive video: An Taoiseach, Enda Kenny, insists that no favourable treatment was shown to Apple as the Dáil debate whether to appeal the EU Commission's recent ruling that Ireland provided unlawful State aid to the American company. 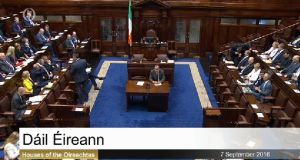 The Government had a comfortable 93 votes to 36 victory on a motion endorsing its decision to appeal the European Commission ruling that Ireland provided unlawful State aid to Apple.

A series of votes lasting almost one hour and 40 minutes followed the 10-hour debate and 30-minute question and answer session as most political groupings introduced amendments to the Government’s motion.

The motion stated that the Government “commits itself to the highest international standards in transparency in the taxation of the corporate sector”.

It also said the Government “resolves that no company or individual receivers preferential tax treatment contrary to the Tax Acts and calls on the Revenue Commissioners to continue to observe this principle”.

The Government also affirmed its commitment to the 12.5 per cent corporation tax rate, the research and development tax credit and “its view that taxation is a competence for member States as set out in the EU treaties”.

Fianna Fáil and Labour supported the appeal although Labour introduced amendments to the motion including a call for the Budget to include measures to underpin minimum effective tax rates for all profitable companies in Ireland.

Labour and the Green Party did not press their motions to a vote. The Green Party motion called for no company or individual to receive preferential tax treatment and supported the OECD and EU tax reform measures.

Labour and the Social Democrats both called for any loopholes that allowed for the avoidance of tax to be closed.

Sinn Féin, who firmly opposed the decision to appeal the ruling, stated in its amendments that the ruling had no effect on Ireland’s corporation tax rate or its competency in setting that rate.

Earlier in the debate the party’s finance spokesman Pearse Doherty said the Ministers were “peddling” a lie to imply the 12.5 per cent rate would be affected.

The party also called for the Government to “immediately take the appropriate actions to recover all payments due to the State as per the European Commission decision”.

It supported the EU ruling and said that a “sweetheart tax deal between Apple and the Irish tax authorities amounted to unlawful State aid”.

Abstentions in Dáil voting were introduced for the first time and four TDs abstained in the Social Democrats amendment which was defeated by 101 votes to 23.

The party had called for a deferral of the vote on the Government’s motion until the full EU ruling was published and made available.

Twenty TDs abstained on the amendments introduced by AAA-PBP which was lost by 95 votes to 11. Their motion called for a substantial increase in the effective corporation tax rate “to fund an increase in expenditure on health, education and housing”.

It also condemned the Government decision to appeal the European Commission’s ruling.

The Taoiseach earlier told the Dáil the ruling “is so profoundly wrong and damaging that it demands an immediate, clear and strong response”.

Enda Kenny told the Dáil that Irish governments over the years have made clear, “as this Government has, that Ireland did not and does not do deals with corporates large or small. It is not how we do business”.

In a trenchant speech, Mr Kenny said: “It is not true that Apple was provided with more favourable treatment than others.

“There was no preference shown. The law was applied fully and appropriately, and Apple paid its taxes due in Ireland.”

In a sharp attack on the commission’s ruling, Mr Kenny told TDs that the picture it painted in its decision “as a country prepared to play fast-and-loose with the law to gain unfair advantage – could not be more damaging or further from the truth”.

“This is not a commission finding that stands by a small country that has played by the rules,” he said. “It cannot be allowed to stand.”

“We will, as the Government has made clear, appeal it before the European courts, with every expectation of success.”

Mr Pringle asked if the Taoiseach saw the irony in debating the issue after the decision had been made.

Mr Kenny told him that “the Cabinet is the executive and the Government and is charged with making decisions collectively. The Cabinet does not come to the parliament and ask for a decision. The Cabinet has made the decision.”

He said: “It comes here today to ask the House to agree with this and to ask the Attorney General to prepare an appeal over the next two months.”

People Before Profit TD Richard Boyd Barrett said that “we fundamentally object to the fact that we are having this debate when we don’t have details of the commission ruling.

“We’re going to make a decision that has enormous implications on €13 billion and we don’t have access to the ruling,” Mr Boyd Barrett said.

Minister for Finance Michael Noonan said a central aspect of the case was that the companies concerned were not tax resident in Ireland.

“And under Irish tax law, non-resident companies are chargeable to Irish corporation tax only on the profits attributable to their Irish branches,’’ he said.

Mr Noonan said the Department of the Taoiseach would host “a high-level event’’ involving various groups on the challenges and opportunities around tax and corporate responsibility.

AAA-PBP TD Paul Murphy said Ireland had been designed by the establishment political parties as a tax haven for the biggest corporations in the world.

They were paying practically zero tax, he added.

“There has been a huge campaign of spin over the past week to confuse this issue,’’ he added.

Fianna Fáil finance spokesman Michael McGrath said to not oppose the EU ruling would be to accept Ireland had engaged in illegal state aid for the past 25 years. This was not backed up by the facts, he added.

Mr McGrath said as elected representatives they should stand behind the Revenue Commissioners as an independent and respected State body.

That body had served the country well, in good times and bad, he added.

“We do not support the commission’s conclusion that these Revenue rulings amount to illegal state aid being provided to Apple,’’ said Mr McGrath.

Sinn Féin finance spokesman Pearse Doherty said the commission had stated the agreement between the Revenue Commissioners and Apple did not correspond to economic reality.

It represented the very definition of State aid, favouring one company over the others with special treatment, he added.