Courts have 'no power' to overturn Callely findings 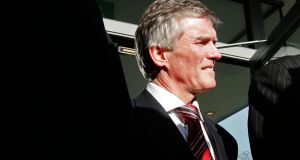 The courts do not have the power to overturn findings made by a Seanad committee against former senator Ivor Callely, the Supreme Court was told this morning.

William Binchy SC, for the Seanad committee, said based on the separation of powers in the Constitution, findings made against Mr Callely were “not judiciable” and it would be wrong to think that simply because the committee had been acting using powers based in legislation, it would make their actions judiciable.

Mr Binchy said the actions of the committee were within its powers under parliamentary privilege. Where the separation of power does arise there may be circumstances where constitutional rights that might otherwise apply are set aside, he said, and this was “an awesome power”.

The Seanad committee is appealing a decision of the High Court which found there had been a breach of fair procedures and a misdirection in law when the committee censured Mr Callely by suspending him for 20 days with consequent loss of pay of nearly €17,000.