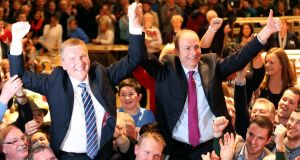 Five years ago Jonathan O’Brien made history by becoming the first Sinn Féin elected for a Cork city constituency in over 90 years and now Ó Laoghaire is set to join him in the Dáil with O’Brien looking set to be elected in neighbouring Cork North Central in the next hour or so.

“We’ve been building towards this success for many years and I want to pay tribute to those in the organisation who carried the flag on the ground for years when it was neither profitable nor popular and who have shown great commitment to this party and this movement for so many years.”

Ó Laoghaire paid tribute to defeated TDs Jerry Buttimer of Fine Gael and Ciarán Lynch of Labour, saying that while he had his political differences with them, they were both hard working committed public representatives.

Ó Laoghaire took the third seat in the constituency without reaching the quota when he picked up 2,127 transfers upon the elimination of Lorna Bogue of the Green Party and Independent Cllr Mick Finn who had a combined total of 6,647 when they were eliminated.

That transfer on the eleventh count brought Ó Laoghaire to 10, 653 – ahead of Coveney who picked up 1,057 in the same count to reach 10,372 and take the fourth seat without reaching the quota but well ahead of Buttimer who picked up 1,274 transfers to end up on 9,117.

Coveney paid tribute to all those elected including Ó Laoghaire but he paid particular tribute to both Lynch and Buttimer who he said had lost out despite being hard working public representatives for the constituency which was reduced from five to four seats in the constituency revision.

Woman left in middle of nowhere after being raped by three Dublin teenagers, court told 18:56
Voting under way in the Dáil to elect the next taoiseach 19:08
Harris signs order to designate coronavirus as a notifiable disease 18:42
Patricia O’Connor murder trial: Jury asked to park ‘shocking’ nature of case outside door 18:37
Teenage girl (16) killed in Cork crash named as Kimberly O’Connor 18:30