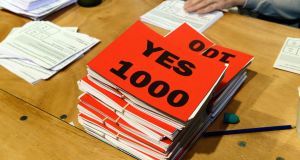 The Yes campaign had a resounding victory in the previously conservative constituency of Cork North West where just 40 per cent of voters registered a No vote.

Cork North West returned one of the highest Yes votes in the country in the 1983 Referendum. It was one of nine constituencies which was 80 per cent in favour of the Eighth Amendment. Now the constituency has delivered a resounding Yes vote of 60 per cent for its abolition.

Speaking at the count centre in Ballincollig, Aindrias Moynihan of Fianna Fáil who was against the repeal of the Eighth Amendment said “clearly the people have spoken.”

The Cork North West electoral area takes in part of Mallow and Fermoy. It runs from Charleville and Rockchapel in the north to Ballingeary, Crookstown and Crossbarry in the south.

Minister of Agriculture Michael Creed of Fine Gael was on the Yes side while the No side consisted of Fianna Fail’s Aindrias Moynihan and Michael Moynihan.