Consensus grows in Fine Gael to maintain right to life 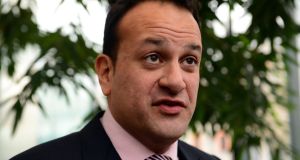 Minister for Health Leo Varadkar said he was “pro-life” and against abortion on demand. Photograph: Cyril Byrne

A consensus is emerging in Fine Gael that the unborn should maintain a constitutional protection in any review of abortion legislation.

The party is said to be broadly in support of the comments of Minister for Health Leo Varadkar on Sunday when he called for the constitutional provision on the right to life to remain.

The Minister said the law as it stood was too restrictive but he was not in favour of getting rid of the Eighth Amendment, which gave equal protection to the mother and the unborn.

He said: “For all its flaws, we have the Eighth Amendment. I do think there should be a right to life of some sort in the constitution but not as is now.

“Surely one thing we should protect is life. I think most people would hold that view.”

Mr Varadkar said he was “pro-life” and did not want abortion on demand to be introduced here.

A number of Fine Gael TDs told The Irish Times the position outlined by the Minister for Health would be similar to the views held by the majority of the party.

“The overwhelming view of the party is that we are a pro-life party,” said one senior source.

“I think there is a consensus emerging that the issues of fatal foetal abnormalities and the issues of rape and incest need to be examined.

“But there is still a strong position that getting rid of the Eighth Amendment is not the way forward. An altering of it would be the preference.”

Taoiseach Enda Kenny has committed to establishing a constitutional convention to examine the issue.

The recommendations of the body will be put to an Oireachtas committee which will be tasked with establishing legislation.

Fine Gael TDs and Senators will be then allowed a free vote and more than a dozen are said to be considering rejecting any proposal to change the constitution.

Meanwhile, Minister of State at the Department of Health Kathleen Lynch has proposed the Labour party should be allowed a free vote if required.

A spokesman for the party said Tanaiste Joan Burton would consider a request but it was a longstanding position that the Eighth Amendment should be repealed.

He said: “We don’t expect the question of a free vote to be an issue. We will lead from the front as a party in securing a referendum and making the case for a more compassionate, humane approach to this issue.”

Fianna Fail will allow a free vote if legislation is required. However, it will not campaign for a referendum.

Sinn Fein will campaign for a repeal of the Eighth Amendment in the upcoming general election manifesto.