Confrontational interviews: do they work?

Opinion: Conflict makes for more dramatic television than the calm exchange of ideas 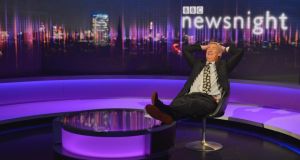 ‘On the week in which Jeremy Paxman retires from his role presenting the BBC flagship Newsnight programme it is worth reflecting on whether that aggressive style of political interviewing actually serves the viewer and the process of democratic debate.’ Photograph: Jeff Overs/BBC/PA

F-list celebrity that I am, I occasionally get approached on the street by strangers asking for my take on some political event or trend. Since the last general election I am regularly asked, “Will Fianna Fáil recover?” Since last month’s local and European elections I have been repeatedly asked “Will this Government last?”. However the one question I have been asked most often by strangers in recent years is “What is Vincent Browne really like”? It is assumed that because I have been in his studio occasionally I can offer some insight to the man. What they really want to know is whether he is actually as annoyed and aggressive as his television persona suggests.

I tend to answer that Vincent Browne is a nice guy and to offer the view that much of the sighing and barking at guests is put on for show. That is not to suggest that Vincent isn’t a substantial broadcaster or that he doesn’t sometimes get genuinely annoyed. He is a serious journalist and he is passionate on many issues especially when it comes to social inequalities. Much of his style of presenting and interviewing, however, is shaped by a shrewd recognition that in order to gather an audience a late night politics programme must above all else be entertaining.

Conflict makes for more dramatic television than the calm exchange of ideas. Vincent Browne’s relatively successful formula on his TV3 programme is to seek to provoke his panelists to row with each other. If he can’t get them to do so, then he himself will row with at least one of the guests, and if all else fails then at times he will even row with himself. It was Michael White, the political writer with the Guardian who most famously described Vincent Browne as Ireland’s Jeremy Paxman. White’s comparison of the two was in a particular context. He did so in a reflective piece written during a visit here to cover the 2011 election and in the context of Enda Kenny’s refusal to participate in a TV3 leaders’ debate because Vincent Browne had previously suggested that Kenny’s media performances were so bad he should go into a quiet room with bottle of whiskey and a revolver and do the necessary.

On the week in which Paxman retires from his role presenting the BBC flagship Newsnight programme it is worth reflecting on whether that aggressive style of political interviewing actually serves the viewer and the process of democratic debate.

It can be argued firstly that, of itself, the more aggressive interview style typified by Paxman and Browne has proved ultimately counterproductive. When Paxman started out on his role as Newsnight inquisitor, the confrontational style of political interview was relatively new. Politicians, and especially government politicians, were still not used to being confronted directly by anyone.

Over time, however, politicians came to expect a more aggressive approach and have either schooled themselves in techniques to circumvent it or simply refuse to subject themselves at all to extending interviews.

Nowadays most senior politicians confine themselves to set piece parliamentary contributions or short, controlled commentaries on topical events when ‘doorsteped’ by political correspondents.

It is hard to remember the last time Vincent Browne had a Government Minister in studio. He has instead had to sate his appetite on political panels made up of lowly junior ministers – or more often aspirant junior minister anxious to prove themselves – and on Opposition or Independent politicians grateful for whatever media opportunity they can get. The Paxman/Browne style of aggressive interviewing tends to close down the opportunity for real political debate and accountability. It leads to the politicians adopting absolutist and overly defensive positions. It prevents politicians from advancing more nuanced or considered views since any such approach is likely to be pounced on as a weakening or an admission of error. The overly aggressive interview style closes off the opportunity for real communication between guest and viewer and prevents any real exchange of ideas between politicians.

There have been many times when Newsnight or Tonight with Vincent Browne have been presented by one of the substitute presenters when real discussion takes place and viewers find themselves thinking I wish it could be like this every night. It may be less entertaining but it is certainly more useful as political coverage. Of course it may not get the same audience.