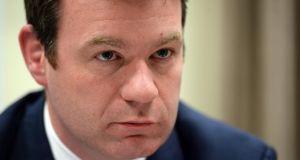 Minister for the Environment Alan Kelly: The new guidelines are to be published following the passage of the Planning and Development (Amendment) Bill in the Dáil last week. Photograph: Cyril Byrne

Minister for the Environment Alan Kelly is expected to publish the controversial new guidelines today on the department’s website. They will allow the minimum size of a one-bedroom apartment to be cut from 55sq m to 45sq m.

The new rules will also allow for one-room studio apartments of 40sq m (430sq ft). Restrictions will be put in place to prevent developers building only the smallest size apartments and studios in new blocks, while studios will be allowed only in mixed developments alongside larger units.

Sinn Féin housing spokesman Dessie Ellis described the reduction in size as a step backwards and warned that the Minister “should be leading and not being led” on this issue.

He said cutting apartment sizes would not make much financial difference to developers. “Do you lower your standards for the sake of a few builders?” he said.

He said: “They are not shoe boxes; they are just a minimum standard that ensures a good standard of living and viability and affordability so we can deliver on those apartments.”

Mr Ellis said some of the bedsits in Dublin city centre were 29sq m and people were renting dog boxes. He said about two years ago a survey was done of 100 of them in the Phibsborough area and virtually every one of them failed the standards.

Dublin City Council in 2007 introduced “what were the best standards in terms of the size of apartments”.

The new guidelines are to be published following the passage of the Planning and Development (Amendment) Bill in the Dáil last week.

Mr Coffey defended the regulation changes in the Dáil.

“Essentially, what the Government is doing is restating the 2007 guidelines for apartment sizes, which compare favourably with other jurisdictions,” he said.

He said the UK minimum size was 39sq m and in Germany it was 48sq m. “Therefore, we are well above the UK standard and, while it is slightly bigger in Germany, it is not a whole lot bigger.