Restrictions should not be countenanced unless other European countries follow suit 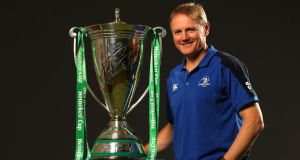 Joe Schmidt, the former Leinster and current Irish rugby coach, poses for a photograph with the Heineken Cup. A report on alcohol sponsorship of sporting events was published by an Oireachtas Committee today. Photograph: INPHO/Billy Stickland.

A ban on alcohol sponsorship of sporting events should not be countenanced unless other European countries were prepared to follow suit, an Oireachtas committee report has recommended.

Fine Gael TD John O’Mahoney, vice-chairman of the committee on transport and communications, said there would be no problem with a ban if alternative funding streams were available.

“In recognising the realities of the State’s current difficult economic situation, where additional funding for sports from Government sources could simply not be considered, the committee agreed that a ban on alcohol drinks sponsorship could not be countenanced at this time,” he said.

Mr O’Mahoney said it was not the committee’s role to “go out and look for” other sponsorship opportunities, and cited the Irish Open golf championship as a popular sporting event that had had difficulty in finding a sponsor.

The committee recommended a prohibition on sponsorship by the alcohol industry should only be considered if it was done on a pan-European basis in order to ensure that Irish sports and sporting organisations were not operating at a disadvantage relative to their international competitors.

It said alcohol sponsorship should remain in place until such time as it can be replaced by other identifiable streams of comparable funding.

The committee also recommended a code of practice for the consumption of alcohol within stadia should be drawn-up by all sporting organisations.

A fixed percentage of all sponsorship received by every organisation from the alcohol industry should be “ring-fenced” and paid into a central fund to be administered by an appropriate body. The fund should be used exclusively for alcohol and substance abuse prevention programmes.

All sporting organisations should be encouraged to support programmes which contribute to social inclusion in order to reduce the abuse of alcohol, particularly among young people.

Fianna Fail Senator Paschal Mooney said it was “not always happy families on the committee” and he would like to see the phasing out of alcohol sponsorship.

A Government clampdown on the promotion of alcohol was proposed in a memorandum sent to the Cabinet by Minister of State for Health Alex White recently.

The memo also outlined new advertising restrictions, a minimum price on alcohol to prevent ultra-cheap off-trade sales and the separation of shop space in which drink is sold from other parts of a premises.

Minister for Transport, Tourism and Sport Leo Varadkar is among those resisting moves to pinpoint a date by which drink firms should be banned from sponsoring big sporting events.

William Flannery of the College of Psychiatrists in Ireland expressed his “disappointment and frustration” at the report’s recommendations.