Noonan on diplomatic drive over initiative, which could give annual savings of €375m 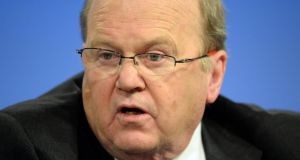 Michael Noonan: Minister for Finance embarks on a diplomatic drive next week to persuade his European counterparts to allow Ireland repay the IMF before European bailout loans are paid off.

Government figures see EU approval for the early repayment of IMF loans as the best opportunity for a long-awaited “debt deal” from European leaders.

Minister for Finance Michael Noonan embarks on a diplomatic drive next week to persuade his European counterparts to allow Ireland repay the IMF before European bailout loans are paid off. Such approval is required because the Government is obliged under the 2010 bailout agreement to repay the IMF and European lenders at the same time.

The Government’s basic objective is to make use of Ireland’s low borrowing costs on private markets to draw down new loans to pay off expensive IMF debt.

This initiative, which could yield annual savings of some €375 million, comes more than two years after European leaders promised to compensate the Government for rescuing the banks at the height of the financial crisis.

A deal on that front remains elusive, prompting repeated criticism of the Coalition’s failure to ensure the EU leaders’ pledge of June 2012 is executed.

It is acknowledged in Government circles that this would be markedly different from the 2012 plan to sell shares in State-backed banks to the European Stability Mechanism bailout fund. The plan ran foul of resistance in Germany, Finland and the Netherlands, although the Coalition insists it remains in play.

However, senior Irish figures now believe the State could secure a better return on some of the money it put into the banks by selling on the open market instead offloading shares into the ESM. On RTÉ Radio last Wednesday, Mr Noonan said the notion of selling Allied Irish Banks on the market over time and using the money to reduce debts was “probably a better option now”.

He also suggested the return to the State in that case would be better than if AIB was controlled by a fund which had no banking experience .

Mr Noonan’s meetings come ahead of talks in Milan next Friday with his European counterparts. Although the ECB is wary of the effort to repay the IMF, Government figures say the main point of uncertainty right now is the requirement for parliamentary approval in Germany to change the terms of the Irish bailout.

This follows German resistance to other debt relief initiatives and scepticism in the Bundestag about the Government’s plan for economic recovery.

Mr Noonan yesterday welcomed the ECB’s decision to cut rates and introduce a new stimulus plan as “good news” for the Irish economy.