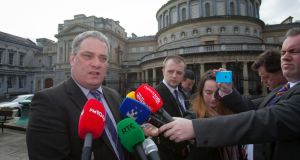 If they didn’t know it already the challenge facing the Coalition parties in next month’s European and local elections is illustrated in the latest Ipsos, MRBI Irish Times p oll.

Any complacency in Fine Gael that it could rely on its new-found status as the biggest party in the country to automatically deliver a satisfactory result has been shattered by the poll which shows Fianna Fáil drawing level with its old rival.

It was always going to be a difficult contest for Labour and the poll confirms that the party will struggle to hold even one of the three Euro seats it won in 2009. It will also lose council seats; the only question being how many.

In some ways mid-term European and local elections are a more difficult challenge for government parties than a general election. Choosing a government focuses the minds of voters because they know that the decisions they make will have a direct impact on their lives in terms of tax and State services. By contrast, European elections appear to be a consequences-free vote and allow the electorate the luxury of its whims. That is why smaller parties and Independents have proportionately done far better in European elections than in general elections.

If the poll results are replicated on May 23rd, Sinn Féin, Independents and smaller parties have a good chance of winning six out of the 11 European seats.

Same trend
The same trend is happening in other European countries, with Ukip poised to do very well in Britain, the National Front in France, far-left Syriza in Greece, and a range of other far-right and left wing parties in other countries from the Netherlands to Finland.

That said, there is nothing inevitable about the outcome in Ireland. While Sinn Féin, smaller parties like the Socialists and Independents are in with a great chance of winning seats in all three constituencies, a lot will depend on the nature of the campaign and the turnout.

For instance, if Sinn Féin achieves the 21 per cent level of support indicated in the poll it will certainly win a seat in each of the three constituencies. However, the party does have a problem in translating poll support into votes. That was illustrated in the presidential election of 2011 when Sinn Féin candidate Martin McGuinness got 18 per cent in the first Irish Times poll of the campaign a month before the vote but ended up with 13.5 per cent.

Part of the explanation for the discrepancy between polling and voting is that Sinn Féin support is heavily concentrated in the poorest DE segment of the electorate which traditionally does not turn out to vote in anything like the same numbers as the better-off social categories.

Sinn Féin has adopted a risky strategy of running relative unknowns in the three Euro constituencies and it will be fascinating to see how well the party support translates into votes for them.

Just as the polls tend to overstate the potential vote of Sinn Féin they can understate the likely level of support for Fine Gael whose vote is concentrated in the AB and C1 categories.

The likely outcome for Independents and smaller parties is also difficult to forecast given the disparate nature of the candidates and the very different ideological positions that they hold.

The poll is also good for Fianna Fáil. After appearing becalmed in successive polls the leading Opposition party has now pulled level with Fine Gael and is clearly in with a good chance of holding the three European seats it won in 2009.

Wrapped up in the good news, though, is one important worry. The Fianna Fáil vote in Dublin at 14 per cent has only barely recovered from the 12.5 per cent it achieved in the disastrous election of 2011.

Difficult position
Labour is in an even more difficult position. In Dublin, where it is on 11 per cent, the party’s European candidate Emer Costello will need a lot of luck to hold the seat won last time around by Proinsias de Rossa. He won 20 per cent of the first preference of the vote in 2009 and Costello is currently far off that.

A lot will depend on the fortunes of Socialist Party candidate Paul Murphy. He took over the seat won by Joe Higgins and as well as not being as well known as his predecessor, he has to contend with a range of other left-wing candidates.

There are also well-known figures like the Green Party leader Eamon Ryan and Nessa Childers, a former Green councillor who won a seat for Labour in the Leinster constituency last time around and is now running as an Independent in Dublin.

The outcome of the local elections will be a far better guide to the next election and much more important for all the parties as it will establish how strong they are on the ground.