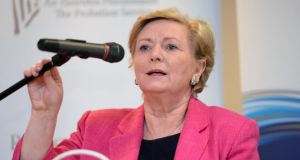 Minister for Justice Frances Fitzgerald has insisted it is “absolutely incorrect” to say the same-sex marriage referendum will lead to “widespread surrogacy”. Photograph: Eric Luke

Minister for Justice Frances Fitzgerald has insisted it is “absolutely incorrect” to say the same-sex marriage referendum will lead to “widespread surrogacy”.

She also described as “nonsense” accusations from the No side that the Government was not interested in childrens’ connection to their biological parents.

Ms Fitzgerald said the Children and Family Relationships Bill had brought in legislation in relation to donors to ensure that children had access to their genetic information.

“We’re the first Government that has done that. So any accusations in relation to that, that we are not interested in connections to biological parents are nonsense, quite the opposite is the truth,” she said.

However, she said voters were not being asked about such issues on Friday. The referendum was about extending the right to marry to same-sex couples.

The other issues which had been raised needed to be legislated for and would be in time, following careful consultation. She said surrogacy would be strictly regulated and she believed in banning commercial surrogacy.

Ms Fitzgerald said the whole area of assisted human reproduction, including donor assistance and surrogacy, primarily affected heterosexual couples and was currently without legislation in Ireland. That was something that “needs to be remedied”, she added.

There would be no right to such services and “no right to a child” under adoption laws. There was careful vetting and court procedures were very often involved.

“In this whole area it will be similar to that. So the idea of widespread surrogacy is absolutely incorrect,” she said.

She was speaking on Monday at the launch of the new policing authority draft legislation.