Charles can expect bittersweet emotions on arrival in Mullaghmore 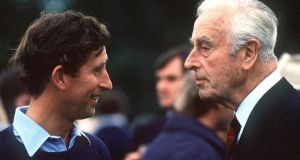 Charles with his beloved great uncle Lord Mountbatten in July 1979: when the prince takes a tour of Classiebawn Castle he may recall the many stories Mountbatten told him about the place where he and his extended family holidayed every August. Photograph: Tim Graham/Getty Images

Visiting Mullaghmore today will be an important and reflective experience for Prince Charles.

And for others too, who have memories of August 26th, 1979. According to the late artist Derek Hill, who was a great friend of Prince Charles and Camilla, the prince was so intent on visiting Mullaghmore and Classiebawn Castle in the years after Lord Mountbatten’s death that he proposed landing there secretly by submarine.

So, finally setting foot in the Co Sligo village that his favourite grand uncle Lord Louis Mountbatten loved so much is a big occasion. It will release memories and emotions that will be acute and bittersweet.

When he takes a tour of Classiebawn Castle he will recall the many stories Mountbatten told him about the place where he and his extended family holidayed every August.

Of course, walking down by the harbour from where Mountbatten’s little Shadow V boat set off on a sunny Monday morning almost 36 years ago will prompt darker thoughts.

How The Irish Times covered the death of Lord Mountbatten

It will be a sombre occasion too for local people, for those who took the dead, dying and injured from the water after the IRA bomb exploded, and for people such as John Maxwell, who lost his 15-year-old son Paul in the blast. Maxwell will be there today to greet Prince Charles and Camilla.

I’ve written before about how I was a 23-year-old reporter with the Donegal Democrat in Ballyshannon at the time. It was a quiet day in the newsroom until the Democrat’s managing director looked in and said: “I just got a call from the IRA. They said they’ve just blown up Lord Mountbatten’s boat – and Lord Mountbatten is on it.”

Mullaghmore is just nine miles from Ballyshannon so we were quickly at the scene. At the harbour local people were stretchering bodies ashore.

The last body to be taken in was that of Paul Maxwell, who had been helping out on the boat.I could see a tall bearded man in shorts and sandals pacing up and down the harbour wall. It was John Maxwell waiting for a little half- decker to bring his son’s body to the harbour steps. When the boat came alongside he cried repeatedly: “Look what you’ve done to him, look what you’ve done to him. I’m an Irishman, he’s an Irishman, is this the sort of Ireland you want?”

Thomas McMahon was convicted for his part in the murders. Francis McGirl, who was with him when he was arrested, was acquitted; he later died in a tractor accident.

McMahon, from Carrickmacross, served almost 20 years in prison and was released in 1998 under the Belfast Agreement.

On a number of occasions John Maxwell has sought to speak to McMahon.All his overtures were rejected.

At least on this evening in Mullaghmore with Charles and Camilla, Maxwell and others there will be memories, perhaps some healing, and certainly shared humanity.