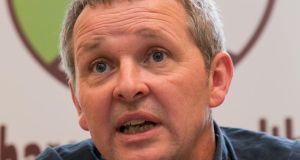 Possible changes to the system of “money messages” – used by the Government to block opposition Bills – have been suggested to a Dáil committee.

TDs on the Dáil reform sub-committee met at Leinster House on Tuesday night and were presented with a “discussion paper” which examined the history of the money message system and its recent use by Government.

The Government has used the little-known provision – which requires its consent before opposition Bills proceed through the legislative process – to block more than 50 opposition Bills, despite their passing by a majority in the Dáil on their first vote.

TDs will return next week once they have considered the report. One possibility it suggests is having a lengthy consultation process involving the promoter of the Bill, Oireachtas civil servants and the Ceann Comhairle before a Bill proceeds. Another suggestion is allowing the Bill to proceed through its committee stage before a decision is made on a money message.

People Before Profit-Solidarity TDs last week took the Ceann Comhairle to the High Court over his decision to block their attempt to change the rules. The full case will be heard in the coming weeks.

People Before Profit TD Richard Boyd Barrett said he and his colleagues would continue to argue for the end of the current system.

“It’s just a political ruse. It’s a subversion of the democratic process,” he said.