Cameron has eight reasons to lift the phone to DUP leader

McCrea lost out to Kinahan, the only UUP member to back same sex marriage

The results of the UK elections for the 4 Belfast constituencies were counted in Kings Hall overnight. Northern Ireland Editor Gerry Moriarty reports on those counts and the overall situation in the North. Video: Bryan O'Brien 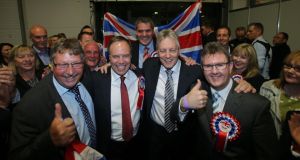 It was a good night for Peter Robinson in that lost pride was restored after his namesake, but no relation, Gavin Robinson won back East Belfast for the DUP.

The period ahead could be good too if David Cameron comes courting his support.

Naomi Long upped her vote considerably from 2010 when she sensationally defeated the First Minister. But hers was too big a challenge against the combined unionist pact of the DUP, the UUP, the TUV and UKIP in East Belfast.

The arithmetic was always against her.

But that wasn’t the story of the night, not by a long shot.

The Ulster Unionist Party dampened the DUP celebrations in the King’s Hall count centre in Belfast just a little by taking South Antrim, where longstanding DUP politician and preacher man, the Rev William McCrea was the outgoing MP. So, the DUP was left with eight seats, when it was hoping for 9, or even 10.

Yet, it’s a form of arithmetic that could give Robinson and the DUP some clout in Downing Street. Cameron in the end might have enough Tory seats to be returned as prime minister but he might welcome those eight DUP votes to provide extra security against the vicissitudes and uncertainties of a slim majority

It was interesting in South Antrim that the evangelical Protestant Mr McCrea lost out to the liberal Danny Kinahan, the only member of the UUP to vote for same sex marriage in the recent lost vote on the matter in the Northern Assembly.

So, this wasn’t just a change of MP, it could also mark a little social shift in Northern Ireland. And it’s reasonable too to speculate that the controversy over former DUP health Minister Jim Wells linking same-sex parents to child abuse damaged McCrea here.

And it got much better for the UUP and its leader Mike Nesbitt. Daylight had arrived when the unionist pact candidate, Tom Elliott of the UUP, triumphed over Sinn Féin’s Michelle Gildernew. This caused real surprise and will hurt Gerry Adams and Martin McGuinness. Their abstentionist representation in Westminster is down from five to four.

That will be a shock to the Sinn Féin system when the graph appeared to be travelling in an upward direction. That Sinn Féin Catholic head-count leaflet in North Belfast is also a ruse that the party will regret.

Normally, what Sinn Féin has it holds, and indeed strengthens. Gildernew was expected to hold this seat because one of the other recent givens of Northern politics is that Ulster Unionists just “can’t get their act together”.

This time they did, in two constituencies.

And there was a period during the night when it seemed there was a chance that the UUP could increase its number of seats from zero to three. The personable Jo-Anne Dobson for a while appeared to be doing very well in Upper Bann but ultimately the DUP candidate David Simpson held out.

The other big-focus marginal was South Belfast where SDLP leader Dr Alasdair McDonnell was under pressure both from the DUP and Sinn Féin. But he came through. That will safeguard his leadership for a period, although some in the party may still feel it is time for a change at the helm.

Now the attention will turn to whether David Cameron will require DUP support, if not to elect him as British prime minister, then to ensure that he can live more securely in Downing Street. Robinson will be in London this weekend for the Victory in Europe 70th anniversary celebrations.

There’ll hardly be any surprises if some contact is made.

Martin McGuinness predicted earlier in this campaign that there was no chance of the DUP playing a pivotal role in choosing the next prime minister. Robinson may not help choose him but he certainly could be pivotal in keeping him in power. As dawn broke today with justification he could say, “I think that the role of minor parties will be more important in this parliamentary term than ever before”.

Now the question is what price he will exact from Cameron for that support.

One hopes that he will concentrate on a deal that allows for greater political stability for Northern Ireland rather than chasing after concessions on polarising issues such as flags and parades.