Cabinet plan to remove jail for non-payment of some fines 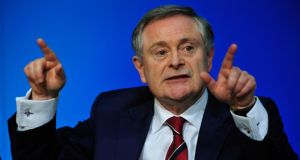 Minister for Public Expenditure and Reform Brendan Howlin said on Wednesday the Government was planning to introduce legislation with a “general provision for debt whereby people wouldn’t go to jail. I think we’re all concerned about people going to jail for two hours for not paying their TV licence”.

People will no longer face the threat of jail for non payment of fines, including water charges under new legislation planned by the Government

The Cabinet is on Wednesday expected to discuss proposals from Minister for the Environment Alan Kelly and Minister for Justice Frances Fitzgerald to deal with small-scale debt.

The proposals to introduce attachment orders to customers who refuse to pay Irish Water were not dealt with when the Cabinet met briefly at 8am and will be discussed during a second Cabinent meeting on Wednesday.

The meeting was held at 8am because Ministers are due to attend the Arbour Hill commemoration ceremonies.

A Government source said the legislation will be introduced by the Department of Justice and will offer legal protection for people struggling to pay the new charge.

“There will be a general provision for debt whereby people wouldn’t go to jail. I think we’re all concerned about people going to jail for two hours for not paying their TV licence,” Minister for Public Expenditure and Reform Brendan Howlin said before the meeting.

“So for general debt whether it’s for the local plumber or the local electrician who can’t collect his debt there should be some provision to ensure that that could be collected, and water obviously falls into that category.”

He said there would be a threshold below which people would be exempt from any further payment in cases of genuine hardship.

The proposal will differentiate between those who can’t pay and who won’t pay.

“The Department of Environment has not got the powers to introduce new measures so Alan Kelly has been working with Frances Fitzgerald for some time on these new proposals,” a senior source said.

“The aim is to offer no jail time and legal protection for families who cannot pay the new charge as opposed to those who won’t pay.”

The current water charges are €160 a year for a single person and €260 for others. Households will also be eligible for a conservation grant of €100 from the Department of Social Protection.

The compliance measures have been in draft form since January and have been with the Attorney General Marie Whelan’s office for weeks.

Ms Whelan’s office has been examining proposals to introduce attachment orders on wages and welfare payments.

Tánaiste Joan Burton was said to be opposed to the measure but the Departments of Social Protection and the Environment are understood to have reached a “compromise”.

The plans will also include giving landlords the power to take the water charges from the deposits of tenants.

There are also proposals to attach the unpaid charges to homes meaning a homeowner could not sell their home until the levies were paid.

Under current legislation, late payment penalties of €30 for single households and €60 for others will be applied to non-paying customers.