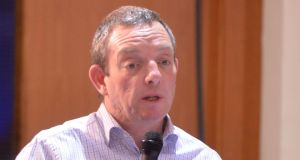 Cork South-Central TD Jerry Buttimer: told the Dáil last week how he had been ‘beaten, spat at, chased, harassed, and mocked’ for being gay. Photograph: Alan Betson/The Irish Times

And Minister for Social Protection and Labour deputy leader Joan Burton this morning confirmed she will not be attending the parade, even though she will be in the US city at the time.

Cork South-Central TD Jerry Buttimer, who last week told the Dáil of how he had been “beaten, spat at, chased, harassed, and mocked” for being gay, said Mr Kenny should at the very least push for a change of policy in the parade.

Mr Kenny is taking part in the famous Fifth Avenue procession, which does not allow banners or displays for gay causes or gay pride.

The new mayor of New York, Bill de Blasio, said he would boycott the parade because it excluded recognition to gay and lesbian groups. He is the first mayor in 20 years to do so.

Ms Burton will also be representing the Government in New York at the same time as Mr Kenny, and this morning confirmed an Irish Times report that she will not be attending the parade this year.

She informed Tanaiste Eamon Gilmore of her views on on the event, which she attended two years ago.

“I was in New York two years ago, like other ministers in New York, I met the Irish Gay and Lesbian community there,” she told Newstalk’s Breakfast show.

“My understanding two years ago was that there were very positive moves to make the parades much more inclusive, which is what I’d like to see because it is a fun day for people in New York and the Irish gay and lesbian community there want to be represented as a significant Irish group and I support that.

“In the context of the mayor saying that until the parade is more inclusive, he is standing aside from it. I attended the reviewing stand briefly when I was there. I also met the gay groups. I advised the Tanaiste that if I went to New York, unless that progress was forthcoming, I wouldn’t be going.”

As well as the unease in Labour about ignoring Mr de Blasio’s lead, Mr Buttimer said he would prefer if no Government minister took part, but understood why Mr Kenny felt he had to.

“I would prefer if no member of the Government took part in the parade in New York,” Mr Buttimer told The Irish Times this morning. “There comes a time when you have to say to the organisers we have had enough of this discrimination and division.”

However, Mr Buttimer said he acknowledged that the parade is an important shop front for Ireland, and said Mr Kenny was an advocate of equality.

“In an ideal world, no Taoiseach or no minister should march in the parade. For me the big issue, why is the ban still there, in a progressive city like New York?”

However, the TD added that Mr Kenny could use his attendance this year as leverage to push the organisers to open the parade up to gay and lesbian groups.

“As a consequence of his going this year, he should discuss a change in policy with the organisers.”