Tánaiste says preference is for Government to serve full term 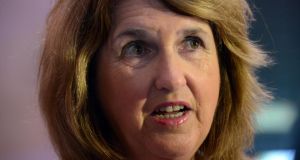 Tánaiste Joan Burton: “I just do not see the space for an election.” Photograph: Cyril Byrne

The Government will run its full five-year term and not call an early general election in November this year, Tánaiste Joan Burton has said.

Ms Burton said she anticipated the election would take place in early 2016, close to the anniversary of the last general election, held at the end of February 2011.

Responding to repeated suggestions the election will take place this November, Ms Burton said she had not been impressed by any argument advanced for it.

“The Budget is in the middle of October and then there is the Finance Bill and the Social Welfare Bill. We need a reasoned debate on the Budget and on social welfare measures and we need to allow time for that

“I just do not see the space for an election. My own preference is to see out the full term,” she said.

The prospect of an early election has been raised by the latest Irish Times Ipsos MRBI opinion poll, which showed a four percentage point increase in Fine Gael support.

However, the showing was less positive for the Labour Party with support level remaining at 7 per cent.

Ms Burton spoke to The Irish Times about the election timing before the opinion poll results were published.

“I think it’s important that the Coalition goes its full term. People have been talking about an interesting election in the UK. It is interesting that prime minister David Cameron went for a five-year parliament.

“Opting for a five-year term, from the country’s point of view, allows the maximum level of recovery from the recession and the difficulties the country faced.”

Speaking in Limerick, Ms Burton acknowledged Labour would face a tough challenge in the general election.

“We’re more than up for the fight, and we have a powerful case to make. Ireland is in a much better place than it was four years ago when Labour took office. But the recovery is not yet secure.

“This country needs stable government and responsible management of the economy.

“It needs parties in government who are willing to face up to the social challenges of our time,” she said.