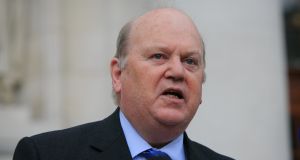 Minister for Finance Michael Noonan. Voters have varying ideas on how he should use an extra €1.5 billion he has said will be available in the budget. Photograph: Gareth Chaney/Collins

Extra spending on the health service rather than tax cuts is the priority for voters in the forthcoming budget, according to the latest Irish Times/Ipsos MRBI poll.

The allocation of more resources for health easily topped the list when voters were asked how the Government should use an extra €1.5 billion that Minister for Finance Michael Noonan has promised will be available in the budget.

Increased spending on housing and tackling the homelessness crisis came second, with a cut in the universal social charge (USC) third.

Voters were not presented with a list of options but asked to come up with their own suggestions about how Mr Noonan should loosen the purse strings.

Increased spending on healthcare, including references to extra doctors and nurses, far exceeded any other priority in the eyes of voters.

Housing and homelessness came next, with 12 per cent of voters viewing this issue as a priority.

There was quite a disparity across the political spectrum, with Sinn Féin voters far more likely to pick this issue than supporters of other parties.

For Sinn Féin voters, housing was almost as equally important as health, while for other voters health was far more important.

The reduction or abolition of USC was a priority for just 8 per cent of voters, with Fine Gael voters the most concerned and Sinn Féin supporters the least bothered by it.

A number of issues were clustered together as the next most important. A reduction in income tax, the abolition of water charges and extra spending for schools each was supported by 6 per cent of voters.

Labour voters were the most inclined to highlight the desire for tax cuts, while Sinn Féin supporters and those who back smaller parties and Independents were most inclined to point to the abolition of water charges.

Interestingly, just 1 per cent of voters suggested a cut in property tax as a priority, even though it is a far more significant payment for most households than water charges.

Higher social welfare payments were suggested by 5 per cent of voters, with Fianna Fáil and Sinn Féin supporters the most enthusiastic.

Increased State pensions came close behind, with 4 per cent backing such a move, and again Fianna Fáil voters were the most supportive.

Just 3 per cent of people suggested increased spending on childcare as a priority.

Labour voters were much more inclined than supporters of any other party to highlight the demand for more spending on childcare.

Fine Gael voters were the next most enthusiastic, but there was little demand for action on the issue by Sinn Féin supporters.

A wide range of suggestions received the backing of 1 or 2 per cent of voters, including more capital spending, a reduction of tax on businesses, the end of the pension levy and the provision of extra gardaí.

An increase in public service pay attracted very little support, with less than a half of 1 per cent suggesting it.

Overall, the key finding in the poll is the emphasis on the provision of extra State services rather than cuts in tax.

The parties in the Coalition have agreed on a 50:50 split between their demands for the budget, but the poll would indicate the public is far more supportive of the Labour demand for more spending rather than the Fine Gael emphasis on tax cuts.

Labour figures have made it clear that if they are in a position to form part of the next government they will be demanding a reallocation of extra resources to favour spending programmes rather than tax cuts.

When it comes to the ballot box, it remains to be seen whether voters will support parties who place the emphasis on more State spending or tax cuts.

1 How one couple’s weekend away resulted in 30 Covid-19 cases
2 Covid-19: College students on a break and middle-aged people in rural pub linked to large clusters
3 Taoiseach tells TD to ‘cop on’ over criticism of contact tracers asking about pubs
4 Miriam Lord: This Government is all out of ideas. Dial 1800 – Help
5 Colleges may have to create 1,000 extra places after Leaving Cert errors
Real news has value SUBSCRIBE