Opinion: ‘The Government is about to launch its first post bailout budget without any detailed overall economic road map’ 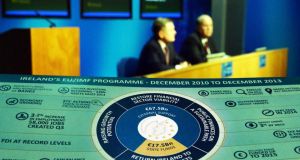 ‘Ireland managed to exit the Troika bailout relatively early because government fiscal policy was operating to a strict four-year economic plan. Now 10 months later the Government is about to launch its first post bailout budget without any detailed overall economic road map.’ Above, Brendan Howlin, Minister for Public Expenditure and Reform with Michael Noonan, Minister for Finance at the announcement of the bailout exit. Photograph: Cyril Byrne / THE IRISH TIMES

This week our political system is settling into the traditional Irish rituals of budget-making. There will be bits and pieces of speculation today and tomorrow about what the budget may contain. There will be strategically-placed leaks over the weekend.

Then in lengthy speeches on Tuesday afternoon Minister for Finance Michael Noonan and Minister for Public Expenditure Brendan Howlin will reveal the outcomes of a budgetary process in which only they, their officials and a handful of politicians have had any substantial input.

Ireland is one of the few western democracies which still adopt this secretive and confined approach where the budget is debated and decided only at core Cabinet and then presented to parliament and the nation as a fait accompli.

On The Week in Politics programme last Sunday Áine Lawlor referred her panel back to a speech on parliamentary reform which Fine Gael’s then finance spokesman Richard Bruton made at the MacGill Summer School in 2010. It makes interesting reading as he and his Cabinet colleagues sign off on their fourth budget.

In 2010 Bruton criticised how an “over-weaning executive had broken loose of the shackles of citizen oversight through parliament”. He described parliamentary scrutiny of the budget then as non-existent. He set out detailed proposals to overhaul the budgetary process.

Fine Gael in government, he promised, would publish an impact analysis of its budgetary changes for examination before decisions are made in the budget.

None of that has come to pass. There has been no significant debate about budgetary choices for 2015 in our parliament or in our political system.

Even Ministers were reprimanded in mid-September for daring to discuss what the Government’s options might be.

The Opposition parties have opted or been forced to accept this minimalist approach to debate on budget choices. Sinn Féin and Fianna Fáil only got around to publishing their alternative budgets this week. Their timing in so doing has more to do with seeking publicity in the pre-budget news cycles that any real attempt to shape outcomes for Budget 2015.

Meaningful parliamentary debate about alternative fiscal policies is the centrepiece of the budget-making process in most parliamentary democracies. All we got were tit-for-tat exchanges this week between the Taoiseach and the Opposition leaders as they competed for the smartest soundbite.

Putting forward budgetary proposals several months before budget day presents challenges when projections for end-of-year tax take are sketchy. Social Justice Ireland dealt with this by offering two scenarios, one where €2 million in further cuts would be required and another where a neutral budget would be possible, which is now the applicable scenario.

Not only has next week’s budget been framed largely in private but it is also being framed and published in a vacuum because of the absence of medium-term economic planning.

The sudden manner in which the recovery has arrived, the understandable initial reluctance to accept that it might be real, means that the shift in this country from recession politics to recovery politics is happening very abruptly.

In a short few months the discussions around budgetary policy, such as they are, have moved from choosing between which cuts to implement to choosing which benefits to restore or which type of tax cut to introduce.

Over the past three or four years the politicians and public service should have been writing, publishing and inviting discussion on scenarios about what type of recovery we might have or want. We should have had a national conversation about post-recession priorities.

Noonan may have a sense of where the country should go but there has been no broader political, let alone public, deliberation on, or more importantly buy into, a set of recovery priorities.

It is being suggested that next Tuesday Noonan will set out a multi-annual proposal for tax cuts. Coming as it does, however, in the later quarter of the election cycle this can be seen as having more to do with electoral strategy than economic strategy.

The budget will give the first real indications of what the Government priorities will be for the recovery. This time next week we will know whether it intends to be economically strategic rather than politically self-serving.