Hopes rise of new visa agreement with US for Irish citizens 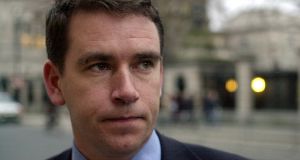 John Deasy: “Definite progress has been made in the last two or three weeks.” Photograph: Photograph: Cyril Byrne

There are renewed hopes in Government circles that an agreement granting visas to Irish citizens to live and work in the United States could be within reach.

Engagement has been stepped up in Washington in recent weeks between Irish diplomatic officials and senior figures on the US political side.

The Government’s special envoy to the United States, John Deasy, confirmed that negotiations were under way. “We’re dealing with the leadership in both the House and the Senate on this issue from both the Democrat and Republican side,” said Mr Deasy, who visited Washington last week. “Definite progress has been made in the last two or three weeks.”

He said that a key element of the package would be easing the requirements for US citizens who want to retire in Ireland. “From the beginning the Taoiseach and I believed that any immigration agreement would require a bilateral arrangement that would benefit both sets of citizens,” the Fine Gael TD said.

Any proposal would need to have support from both sides of the political aisle in Washington, and could be brought forward in the weeks after the mid-term elections next month.

Mr Deasy declined to discuss the specifics of the negotiations, but he said that officials have a “definite timeline in terms of what we would like to see happen”.

Immigration reform has long been one of the most controversial issues in US politics. Under the Trump administration efforts for a comprehensive immigration package have floundered. In particular, legislators on Capitol Hill have been trying to find a solution for “dreamers” – young people who were brought to the United States when they were children.

Mr Trump announced over a year ago that he was ending the deferred action for childhood arrivals (DACA) programme, which President Obama introduced to give legal protection to dreamers.

He instructed Congress to find a legislative solution to tackle the issue, but no legislation has been forthcoming, leaving hundreds of thousands of young people in legal uncertainty.

The last time a major piece of US immigration reform was passed was in 1986. An immigration Bill offering special treatment for several countries, including Ireland, was advanced in 2013 but ultimately collapsed.

Ireland has long argued that its citizens are unfairly treated under US immigration laws, and that the number of visas allocated to Irish citizens does not reflect the strong historic links between Ireland and the US. More than 35 million Americans claim Irish heritage.

In particular, Irish immigration groups have argued that Ireland was adversely affected by the 1965 US law which opened up immigration to more countries but disadvantaged small countries such as Ireland.

The issue of granting visas to Irish citizens eager to work in the United States was raised during the Taoiseach’s meeting with Donald Trump in the Oval Office in March.

1 Harris agrees with PSNI that army council still oversees both Sinn Féin and IRA
2 Drug dealer loses codes for €53.6m bitcoin accounts
3 The close links between Sinn Féin and IRA untangled
4 Varadkar says any Fine Gael deal would have to recognise strength of its vote
5 MV Alta: The unmanned voyage of the Ballycotton ‘ghost ship’
Real news has value SUBSCRIBE