Brendan Howlin pressed to say he will stand for Labour leader 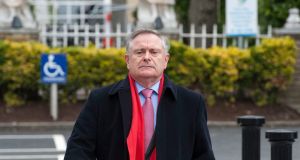 There is increasing pressure on acting Minister for Public Expenditure Brendan Howlin to declare that he will stand for the leadership of the Labour Party. File photograph: Dave Meehan/The Irish Times

There is increasing pressure on acting Minister for Public Expenditure Brendan Howlin to declare that he will stand for the leadership of the Labour Party after members learned on Tuesday that Joan Burton wants to remain as leader.

Deputy leader Alan Kelly is also thought certain to seek to stand in the leadership contest that the party’s rules require after leaving government.

However, both Ms Burton and Mr Kelly may not be able to secure a seconder from the party’s seven TDs, inquiries by The Irish Times suggest.Unless they can secure a seconder, neither would be eligible to stand.

Most members of the parliamentary party hope this would open the way for Mr Howlin to be an agreed candidate for the leadership, obviating the need for an election.

While the party’s TDs said they had not yet been asked to second any potential candidate, indications are they do not favour nominating either.

TDs Willie Penrose and Brendan Ryan both said that their preference was to have an agreed candidate.

“It would be better if we could come to a consensus on a new leader without a contest,” Mr Ryan said.

Mr Penrose, who is chairman of the parliamentary party, said that “it was still the best way forward” to have an agreed candidate.

Sources close to both Minister for Education Jan O’Sullivan and Junior Minister Seán Sherlock said they were strongly of the view there should be an agreed candidate for the leadership from the parliamentary party.

TDs confirmed that when they speak about an agreed candidate, they are talking about Mr Howlin.

The party’s only remaining TDs are Mr Howlin, Ms Burton and Mr Kelly. So if Mr Howlin did decide to stand, he is unlikely to second either of his potential rivals.

This would mean that the only route to a nomination for the leader and deputy leader would be through each other.

Former TD Ciarán Lynch said that “a lot of people would welcome it if Howlin came out and gave some direction.”

Mr Lynch’s view was echoed by several other party figures.

Mr Howlin could not be reached for comment. However, he told a local newspaper in Wexford last week that he was still considering his future.

“I haven’t made up my mind in relation to this. Labour has gone through a very bruising election,” he told the Gorey Guardian.

Some TDs fear there will be a revolt in the party if they agree to prevent a leadership election. Mr Ryan disputed this view.

“My feedback is that it is not necessarily the view that members believe there should be a contest,” he said.

Mr Penrose echoed his view, saying a preference for an agreed candidate was the “widespread view” in his constituency party.