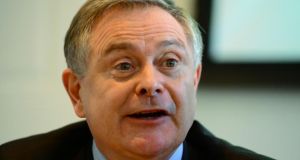 Low-paid workers will be the major beneficiaries from the forthcoming talks on restoring public service pay, the Minister for Public Expenditure and Reform Brendan Howlin has said.

However he warned that pay restoration would involve continued staff co-operation with reforms that were “hard wired” into the Croke Park and Haddington Road agreements.

He suggested this would include continued peaceful resolution of disputes and acceptance of binding arbitration.

Addressing the Siptu health division conference in Dublin, Mr Howlin signalled that pay restoration in the public service would require a multi-annual approach.

He said reversing the various cuts in one fell swoop could imperil economic recovery.

Mr Howlin is expected to seek Cabinet approval next week to enter into talks with unions on unwinding financial emergency legislation introduced over recent years which underpinned various cuts made to public service pay and pensions.

He has ruled out reversing the cuts in “one big bang”.

Over the last fortnight Minster for Health Leo Varadkar and Minister for Jobs and Enterprise Richard Bruton both called for new reforms and productivity measures to be put in place as part of pay restoration.