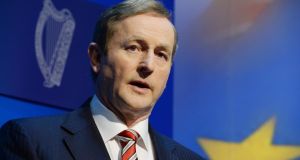 Taoiseach Enda Kenny speaking to media after the publication of heads of Bills in the Protection of Life during Pregnancy Bill 2013, at Government Buildings, earlier this month. Photograph: Alan Betson / THE IRISH TIMES

Boston College has said it will not withdraw its invitation to Taoiseach Enda Kenny to speak at the US university later this month despite protests from pro-life lobbyists.

Mr Kenny is due to speak at a commencement, or graduation, ceremony at the college on May 20th and will also receive an honorary Doctor of Law degree from college president Rev William Leahy SJ.

An online petition has been circulated to anti-abortion groups in the United States urging the Jesuit-run university not to invite Mr Kenny because of the proposals contained in the Protection of Life in Pregnancy Bill. The campaigners claim the Bill facilitates abortion in Ireland for the first time.

Phone numbers and email addresses for US Cardinal Sean O’Malley, Rev Leahy, and even to the Pope, who is a Jesuit, were included in the email.

The Catholic Action League executive director C J Doyle, an alumnus of Boston College, said of the college’s decision to invite Mr Kenny: “Even for a university whose Catholic identity is as compromised as that of BC, this decision is shameful and dishonorable. “

However, the university’s spokesman Jack Dunn responded: “Boston College invited Prime Minister Kenny to speak at our Commencement in celebration of our Sesquicentennial anniversary and the historically close relationship Boston College has enjoyed with Ireland. We look forward to having him on May 20.”