Bill to suspend water charges to be debated next week 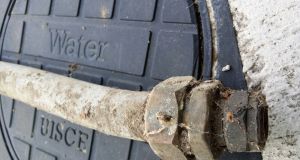 Legislation to allow for the suspension of water charges provides for their re-introduction from March 31st next year. Photograph: Frank Miller/The Irish Times.

Legislation to allow for the suspension of water charges provides for their re-introduction from March 31st next year.

The Water Services Amendment Bill, which will be debated in the Dáil next week, will implement the decision to pause the levies for nine months.

The Bill says the utility cannot issue a bill until March 31st 2017 but provides for an extension if necessary.

An independent commission is to be established to examine the future of the charges and the best regime for payment. Its findings will be sent to a Dáil committee for examination and a decision on the future of the levies.

The legislation prepared by Minister for Housing Simon Coveney allows for additional time if the committee does not finish its work by that date.

However, it will not exceed the time period that the Minister “believes the committee will require to complete its work”.

It is expected Sinn Féin, the Anti-Austerity Alliance-People Before Profit and the Social Democrats will vote against the Bill.

The parties want the charges abolished by the Government. The Green Party and the Labour Party are also expected to vote against it but because they believe in charging for water.

However, Fine Gael and Fianna Fáil will vote together to allow the legislation to pass.

The deal agreed by both parties in May recommended that Irish Water be retained and an external advisory board be set up on a statutory basis to look at its operations. It proposed suspending the water conservation grant and restoring funding to group water schemes based on pre-2015 levels.

The legislation will be introduced in the Dáil next Friday.