Bill on vote to repeal Eighth Amendment blocked in Dáil 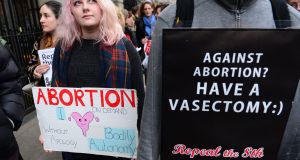 A Government counter-motion to a Bill proposing a referendum be held on repealing the Eighth Amendment has been carried in the Dáil. Photograph: Dara Mac Donaill / The Irish Times.

A Government counter-motion to a Bill proposing a referendum be held on repealing the Eighth Amendment has been carried in the Dáil.

Fine Gael and the Independent Alliance this week reached an agreement on how to handle the motion proposed by the Anti-Austerity Alliance-People Before Profit.

The minority Government partners earlier this year clashed over a Bill proposed by Independent TD Mick Wallace on fatal foetal abnormalities, with three alliance Ministers voting in favour of it and causing a row with Fine Gael over the idea of collective cabinet responsibility.

Taoiseach Enda Kenny said in the aftermath of the row that he could not tolerate a repeat of a situation where the Government was unable to reach a position.

The deal struck in Government ensured the Bill would not progress to second stage due to the work of the Citizens’ Assembly, which is considering issues including whether or not the amendment guaranteeing the equal right to life of the mother and the unborn should be removed from the Constitution.

The agreement reached between the Minister for Health Simon Harris and his Independent colleagues allowed the Bill to be debated in the House on Tuesday night.

The Dáil approved the counter-motion by 96 votes to 47 . 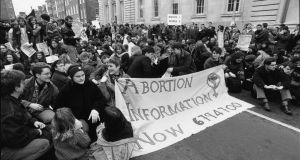 Abortion protests: Down the years

The assembly, which has requested six months to complete its work, will send its recommendations to an Oireachtas committee which will have a six-month timeframe to do its work.

It likely means that a referendum on the issue cannot be held until 2018 at the earliest under a compromise reached by the Government on Tuesday. Some have expressed concern that the current administration will not have a chance to hold a referendum given the precarious nature of the minority Government’s numbers in the Dáil.

Government sources said it was confident the matter had been politically settled and would not resurface until “the end of next year” at the earliest.

During the Dáil debate on the AAA-PBP Bill, Ruth Coppinger TD said the Dáil and the electorate were very clear that Fine Gael and the Independent Alliance were, in effect, opposing the repeal of the Eighth Amendment.

She said Mr Kenny and Minister for Finance Michael Noonan, were the architects of the amendment in 1983.

“What will enrage many women and young people is that Independents who were elected on a platform of repealing the amendment, are now buckling under a whip and kicking this issue to touch,’’ she added.

“So women must wait and, also, must so many young people, impatient to downgrade the church’s grip on people’s lives.’’

Ms Coppinger said the issue was about bodily autonomy. “The key point is we must keep women’s bodies out of the Constitution,’’ she added.

Her party colleague Bríd Smith said there public were angry with the Taoiseach and Government Ministers about the issue.

Minister for Health Simon Harris said during the debate the cannot be answered “with one word or three words or one Bill”.

He declined to give a second hearing to the AAA-PBP Bill to provide for a referendum to repeal the Eighth Amendment to the Constitution on abortion, which puts the right to life of the unborn on an equal footing with that of the mother.

He said the Citizens’ Assembly should be allowed to conclude its deliberations and make its recommendations.

“Tabling a referendum Bill is the easy part,” he said. “Telling the Irish people what would replace that constitutional amendment in law or elsewhere is the difficult work we have to do.”