Sale and supply of laser torches should be targeted, says Fianna Fáil 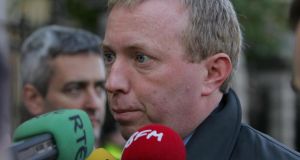 Timmy Dooley of Fianna Fáil: said the problem would be tracing the culprits. Photograph: Eric Luke

Legislation to criminalise the use of laser beams to dazzle pilots is expected to be passed in the Seanad this week.

The State Airports (Shannon Group) Bill, which creates a semi-State of Shannon Airport and the restructured regional Shannon Development, also includes a section to criminalise attacks on commercial and military flights.

This follows confirmation by the Irish Aviation Authority that there were 158 laser attacks on Irish airspace last year.

A laser beam was shone on an Air Corps helicopter transferring a seriously ill child to hospital in Dublin last week. This is the 11th attack on Air Corps aircraft to date this year, with 49 such attacks last year.

Fianna Fáil transport spokesman Timmy Dooley welcomed the legislation but said the difficulty was finding the perpetrators. He believed the area that needed to be targeted was the sale and supply of lasers. “These small little laser torches are easily available,” he said.

He said such lasers were used by Ukrainian protesters in the early days of the conflict when they feared air attack by the military.