Berlin ready to compromise on ESM 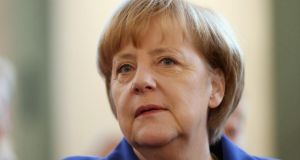 Angela Merkel: she and European Commission president José Manuel Barroso discussed the Berlin-Brussels standoff during his visit to Berlin this week

Germany has indicated that senior bondholders could be tapped in future wind-downs of euro zone banks, putting it at odds with bank-resolution proposals favoured by Brussels.

Proposals circulated in Berlin ahead of today’s EU leaders’ summit suggest that Germany is prepared to back ESM bailouts of struggling banks as part of a new EU regime once all other sources of financing – including senior bank bondholders – have been tapped.

EU leaders will discuss progress on banking union at a two-day summit in Brussels which begins today. Despite agreeing in principle to the concept of “banking union” at their summit in June 2012, months of stand-offs have followed between Berlin and Brussels over key elements of the proposal.

Germany indicated yesterday it was ready to agree rules by the end of this year to permit bailouts of national EU banks by the ESM bailout fund – but only as a last resort and under strict conditionality.

Crucially for Ireland, the proposals circulating in Berlin yesterday do not foresee any element of retrospective recapitalisation, as demanded by the Government to recoup taxpayers’ money pumped into failing Irish banks.

The proposals are expected to be put to EU leaders today, although the German government refused to comment yesterday. In Berlin’s view, only the 130 or so European banks deemed systemic by the European Central Bank should be eligible for ESM funding to cover the cost of bank recapitalisations or wind-ups, but only as a last resort.

Berlin advocates that bank shareholders, followed by junior and then senior bondholders, should be first tapped. Further write-downs would have to be shouldered by other institutional investors, a bank’s savers and trading partner banks. The final line of defence should include, in order, other EU banks and respective national governments. Only after this should the ESM bailout – thus EU taxpayers – be tapped for funding.

As a final backstop, Berlin insists that participating parliaments must back the move. Retaining national parliamentary control of ESM bank recapitalisation is crucial, Berlin says, to overcome growing Bundestag doubts on bailouts.

Chancellor Angela Merkel and European Commission president José Manuel Barroso discussed the Berlin-Brussels standoff during his visit to Berlin this week. They spent considerable time poring over a major bone of contention: European Treaty article 114 on the internal market, which the commission chose as its hook for getting involved in a bank wind-up regime.

Berlin objected strongly, viewing this approach as a legal trick by Brussels to grab some competence over the budgetary sovereignty of member states.

A compromise proposal could involve article 352 which allows the EU, after a unanimous European Council vote, to pursue action perceived as necessary for the union but not defined by the treaties.