Banking inquiry: rezoning and lack of planning led to collapse

Marie Hunt, head of research at CBRE, says much of development was not needed 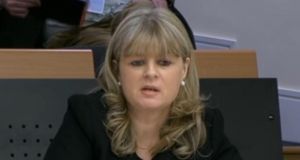 Marie Hunt, head of research at CBRE Ireland, told the committee much of the development was in parts of the country that did not need it

Extensive land rezoning and a lack of a national planning strategy, as well as cheap bank debt and government tax incentive policy, all fuelled an economic boom which collapsed more spectacularly than market data suggested it would, the Oireachtas banking inquiry has heard.

Marie Hunt, head of research at CBRE Ireland, a commercial real estate services company, told the committee much of the development at the time was in parts of the country that did not need it.

“We were building too much accommodation, much of which was in the wrong locations. The pace of development was unsustainable and needed to be curtailed,” she said.

CBRE predicted that had the cycle followed its normal or expected market pattern, as was its view at the time, commercial values would have fallen from peak levels, dipped toward negative territory, plateaued and then begun to recover.

“However, due to the unforeseen worldwide banking collapse and the complete disappearance of debt funding that materialised following the banking crisis, the commercial property crash experienced was much more severe than any previously experienced in Ireland.”

Ms Hunt said a lack of government investment in a national property register, unlike other countries, made tracking trends, a “significant challenge”.

Between 2001 and 2008 Irish investors spent over €46.35 billion in income-producing assets with over 50 per cent of this occurring in the UK and 23 per cent in Ireland.

At the peak of the market in 2006, 36 per cent of investment spend in Ireland was from developers; 26 per cent from syndicates, 20 per cent private investors and 10 per cent institutional buyers. The remainder was attributable to investment funds, pension funds, occupiers and others combined.

The inquiry also heard that almost €8 billion worth of commercial investment property was sold in Ireland between 2004 and 2008, with €3.6 billion of that invested in 2006 alone.

Addressing the inquiry, John Moran, managing director of Jones Lang LaSalle Ireland, said the clients they advised on acquisitions often added between 20 and 50 per cent to the value of properties.

“Frankly we were always quite unsure how they came to these decisions themselves,” he said.

Mr Moran said the firm’s advice to clients during the boom years was strategic with a view toward the “saleability and lettability (sic) at that current time”.

“Any further detail about funding and lending during this time would be more accurate coming directly from the banks, lenders, and borrowers themselves,” Mr Moran explained.

However, offering an overview of a heating investment market during the period, he said the “major players” in Ireland were domestic buyers who accounted for about 90 per cent of all investment volumes between 2005 and 2007.

Demand was driving activity levels and capital values of Irish commercial property increased by 72 per cent in the five years up to September 2007, which they define as the peak of the market.

“Property yields were at record levels, which was a reflection of the strong investor demand and the availability of significant amounts of debt,” said Mr Moran.

In 2005 and 2006 investors were “more aggressively seeking to move up the risk curve” undertaking development alone or in conjunction with developers through joint ventures.

“Development land also saw a significant increase in activity. Between 2004 and 2006, the number of deals in Ireland increased significantly.

“The market was characterised by strong demand from developers and investors, who were chasing product and competitively bidding for all assets that came onto the market.

Deputy Joe Higgins asked about the nature of investment syndicates to which Mr Moran said they were typically made up of high net worth individuals and professionals, put together by specialist companies.

“It wouldn’t have been unusual to have clubs of 10 to 20 people” pooling investment money, he said, with doctors and lawyers taking “significant risks” which they shouldn’t have.

He told Senator Marc Mac Sharry his firm was at the conservative, not the aggressive end of the market and that it took its consultancy responsibilities very seriously.

They would have prepared property valuation reports for syndicates preparing to invest in deals of up to €200 million and he accepted syndicates “played a part” in fuelling the boom.

However, he said, they believed there would be a soft landing in the market and nobody in Ireland was aware of what was going on in global financial circles, including the pending collapse of Lehman Brothers in the US.

Around 2005 they began to warn clients the market was unsustainable but the values continued to rise for the following two years.

They anticipated price drops of between 5 and 15 per cent, but not the 70 per cent experienced in the commercial property sector and 90 per cent relating to development land.

Today’s hearings are the final in the “context phase” of the inquiry and will hear later from Marie Hunt, executive director at commercial real estate services company CBRE.

Mr Moran said he would not apologise for Jones Lang LaSalle’s role as joint agent in the now controversial €412 million sale of the glass bottle site in Dublin in 2006. He said the company’s role was to maximise the potential value of the sale but that ultimately this was dictated by the market.

The high profile deal probably had very little impact on the overall market as it preceded the sale of a “certain well known hotel in Dublin 4” which was the last of such high level sales, he said.

Deputy Kieran O’Donnell asked him if he felt he had a “moral” responsibility in relation to the sale value of the site.

“We don’t have a moral obligation to the buyer, absolutely not,” replied Mr Moran who reiterated that ultimately their duty was to maximise the value of the property for their vendor client.