Opinion: Diarmuid O’Flynn’s election would be the right kind of shock: an electrifying suggestion that Ireland is not supine 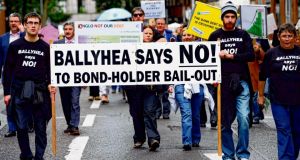 ‘One of the few signs there is some dignity left in Ireland has been the wonderful way in which the people of Ballyhea and Charleville in Co Cork have marched every Sunday since March 2011 to affirm their unwillingness to accept the debts so immorally imposed.’ Above, a Ballyhea protest at Leinster House in 2012. Photograph: Eric Luke

Watching Michael Noonan abase himself, and us, before Donald Trump last week, I could not avoid the thought: if he will kowtow like this to a bombastic property developer, what must he be like with the European Central Bank?

Trump is a ludicrous man whose main contribution to the public life of his own country was to feed the lie that Barack Obama is not its legitimate president because he was born in Kenya. Yet Noonan fawned on this creature in a manner so unctuous that he made Uriah Heep look like Chuck Norris. In such moments are deep truths revealed: the Government’s “toughness” on the little people is in inverse proportion to its weakness before the big ones. And this in turn was a reminder of what is at stake in the European Parliament elections: national dignity.

The imposition of €64 billion of private banking debt on Irish citizens has been so thoroughly normalised that those of us who find it shocking begin to wonder if perhaps it is we who are mad. We need sane outside voices to remind us, every so often, that yes – it really is an outrage. The latest is Philippe Legrain who until earlier this year was head of the team of strategic policy advisers to the president of the European Commission, José Manuel Barroso. In his fine new book, European Spring, Legrain helpfully reminds us of the nature of the game: “had Irish banks defaulted on all their debt at the end of September 2010, German banks would have lost €42.5 billion, British ones €27.5 billion and French ones €12.3 billion.”

Blackmail
Legrain characterises in stark language the way the interests of those banks were placed ahead of those of Ireland when the troika took over: “Euro zone policymakers, notably ECB president [Jean–Claude] Trichet outrageously blackmailed the Irish government into making good on its guarantee, by threatening to cut off liquidity to the Irish banking system – in effect, threatening to force it out of the euro . . . This was a flagrant abuse of power by an unelected central banker whose primary duty ought to have been to the citizens of countries that use the euro – not least Irish ones. Bleeding dry Irish taxpayers to repay foreign debts . . . was . . . shockingly unjust.”

Legrain is quite a mainstream figure – pro-market, pro-EU. He is simply telling an open truth. But no one who purports to speak for the citizens of Ireland dares to use this language of outrageous blackmail, flagrant abuse of power and shocking injustice. They can’t do so because four parties – Fianna Fáil, Fine Gael, Labour and the Greens – capitulated in office to this blackmail and bullying. At no point did any of them find the courage to challenge, on behalf of their fellow citizens, the legality or morality of what was done – and is still being done – to Ireland. When tested, they abased themselves and their country.

This is why the European elections offer a small but significant opportunity to claim back something that has been utterly lost – a sense of national dignity. There is one overwhelming issue for Ireland in Europe: the shocking injustice of the banking debt.

It weighs on our future but it also calls into question the very nature of Ireland: can a State that succumbs to such bullying regard itself as an independent country? The message we send to our European partners in these elections will tell them a lot about us but also tell us a lot about ourselves. Do we have enough dignity even to name the injustice for what it is?

For me, one of the few signs that there is some dignity left in Ireland has been the wonderful way in which the people of Ballyhea and Charleville in Co Cork have marched every Sunday since March 2011 simply to affirm their unwillingness to accept the debts so immorally imposed. The protest has been deeply informed, entirely peaceful and impressively persistent – a model of good citizenship. It has a genuine nobility in its refusal to be bullied, blackmailed or mocked. It embodies what Ireland most desperately needs: collective self-respect.

Animating spirits
Diarmuid O’Flynn, who is one of the animating spirits of Ballyhea, is standing for election as an Independent in Ireland South. It would be impertinent to suggest to anyone how they should vote – especially since I don’t live in the constituency. But I have (in a personal capacity) endorsed his campaign for the simple reason that he has shown courage, intelligence and genuine patriotism. His election would be the right kind of shock: an electrifying suggestion that Ireland is not supine.

The consensus, of course, would dismiss a vote for O’Flynn as a mere token gesture. Perhaps so – though it is hard to argue that the election of more of the same politicians will be meaningful either. But in any case, a token of what? That Ireland is finding, at last, some belief in its capacity to fight for its own future? That we are not just a lump of fear and acquiescence? We already have, at the highest levels, gestures of humility and tokens of obedience. Why not change them for signs of hope and self-respect?

Data watchdog writes to Sinn Féin over collection of Facebook users’ information 17:06
Substantial reduction in farming needed to hit emission targets – Teagasc 17:02
Investigations to be launched into death of man (71) in workplace-related incident 17:02
Attending Mass a criminal offence under Covid-19 regulations, court hears 16:40
HSE explores option of giving AstraZeneca to some people under 60 16:12