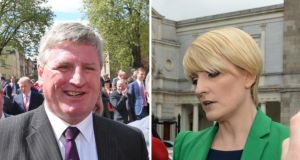 Two events over the course of the week have suggested Fianna Fáil’s renewal drive is beginning to lose steam: the election of a member of the old guard, Bobby Aylward, in the Carlow-Kilkenny byelection, and the abrupt departure of Senator Averil Power - the party’s poster-figure for youth and advancement of women politicians.

That impression may well have been reinforced by the five selection conventions the party held over the past two nights, where former TDs (John Curran in Dublin Mid West; Martin Mansergh in Tipperary and Charlie O’Connor in Dublin South West) all threw their hats into the ring.

It has made it hard for the party to escape the image that its new politics is more or less identical to its old approach.

While Fianna Fáil suffered a debilitating and humiliating loss in the 2011 general election, it is not - in reality - possible for a political party to effect a “scorched earth” approach to renewing itself, because it will often result in the eclipse of its remaining supporters who stood behind the party through thick and thin.

Fine Gael found itself in a roughly similar position in 2002 (although the scale of its collapse was more modest).

One of its big achievements was to bring a raft of new candidates forward (Leo Varadkar and Lucinda Creighton were the most prominent).

However, it must also be remembered that many of the gains Fine Gael made in 2007 were seats gained by seasoned TDs who had lost out in 2002, including Alan Shatter, Charlie Flanagan, Michael Creed, and Brian Hayes.

Seán Barrett, then in his 60s, also returned to the Dáil in 2007 after a long absence.

The reality is, as a seasoned political commentator said on Thursday, “a party needs to put its best team on the field. You just can’t put out the under-21s.”

Cork North West TD for Fianna Fáil Michael Moynihan says Fianna Fáil will comfortably surpass the new electoral rule that holds that 30 per cent of its candidates will be women.

The party has also pointed out that while the returning veterans have grabbed most media attention, the party will be fielding more new (and young) candidates than at any time since its foundation.

A cursory glance through the 40 constituencies illustrates that mix.

In Mayo for example, Lisa Chambers will be Dara Calleary’s running mate. In Galway West, where the convention was held on Thursday night, the party pursued a one-male, one female candidate strategy, with Mary Hoade the favourite to join incumbent Éamon Ó Cuív.

The modernising one-member one-vote system will favour more established politicians. Like other parties, Fianna Fáil is likely to add candidates onto the ticket to achieve balance on gender and age.

Other veterans who may return include Pat “the Cope” Gallagher in Donegal and Mary Hanafin in Dún Laoghaire.

It is less likely that Pat Carey will return in Dublin North West, but given his significant part in the Yes Equality referendum campaign, the party would welcome him back with open arms. All of them would have biddable chances of winning seats.

But there is a raft of young candidates, with the chance that enough will get through to reinvigorate the party - as the likes as Varadkar and Creighton did for Fine Gael.

In Tipperary, Siobhán Ambrose has been mentioned as a candidate, and in Waterford Mary Butler was the front-runner to have won the selection convention on Thursday.

In Dublin, Catherine Ardagh is likely to be selected as the candidate in Dublin South Central, while Laura Reid may be in the mix in Dublin North West.

With Averil Power’s departure, Deirdre Heney is likely to join Sean Haughey on the ticket in Dublin Bay North.

Other young candidates (and prospective candidates) include James Lawless in Kildare North; Aaron O’Sullivan in Cork East; Jack Chambers in Dublin West; Malcolm Byrne in Wexford, and Cormac Devlin, who might come through the gap in the highly competitive Dún Laoghaire convention.