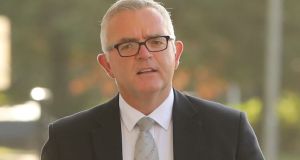 Jonathan Bell claimed he argued that doing so was “folly” but he was ultimately overruled. He was minister at the Department of Enterprise Trade and Investment from May 2015-May 2016, which oversaw the Renewable Heat Incentive (RHI) scheme.

The scheme was intended to encourage businesses to switch from fossil fuels to green alternatives such as biomass. By the summer of 2015 the cost to the taxpayer was beginning to spiral as firms realised how lucrative the incentives on offer were. At one stage it was feared the scheme could cost the public purse hundreds of millions of pounds.

The so-called ‘cash for ash’ scheme caused a political row which culminated in the resignation of deputy first minister Martin McGuinness in January 2017 and the collapse of powersharing at Stormont.

A public inquiry set up to examine what went wrong with the scheme heard a claim on Friday that Mrs Foster was giving mixed messages about closing it.

Mr Bell signed a directive on January 22nd, 2016 to close the scheme. But the inquiry heard that DUP adviser Timothy Johnston “rescinded” his decision.

Mr Bell also claimed that Mrs Foster “created a paper trail” calling for the scheme to be closed, but verbally, her and the DUP’s special advisers were pushing for it to be kept open.

According to Mr Bell’s evidence, the situation came to a head during a tense meeting between Mrs Foster and Mr Bell on February 9th.

“There was tension, the atmosphere was abusive, Arlene was very abrupt,” Mr Bell told the inquiry. “I said ‘minister, I have made the decision (to close the scheme), we had announced the decision and really are you going to place me in a position ... where in my view I am effectively asking a civil servant to do something that is wrong, and order them to do it’. I wasn’t prepared to do it.

“I did argue hard not to do it, but she ordered me to do it.

“She said ‘look, I am the first minister, you will follow my order. I am instructing you and reversing your decision’.

Mr Bell said Mrs Foster said she wanted to keep the scheme open to consult further with industry. “I thought that was totally unreasonable because we had a scheme that was out of control,” he said.

Mrs Foster has given evidence to the inquiry that she was not proposing to reverse the decision to close the scheme completely, but to delay it for several more weeks.

Mr Bell’s former special adviser Timothy Cairns told the inquiry the delay in closing the scheme was only to be for another two weeks.

During Mr Bell’s evidence, the inquiry heard that several hours after the meeting, there was a second friendlier meeting between the two.

At that meeting, Mr Bell said Mrs Foster asked for a two-week extension to the scheme which he agreed to.

Mrs Foster and the two advisers have told the inquiry they believe Mr Bell opposed a two-week extension to the closure of the scheme because it made him look foolish.

Mr Bell completed his two days of evidence by telling the panel he sacrificed his political career to stop the overspend on RHI.

“My only motivation was those hundreds of millions of pounds to get back into the health service and our education system,” he said.

“For that, I knew I would have sacrificed my political career.”