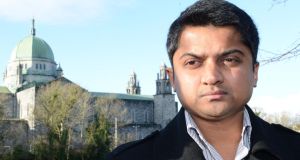 Minister for Health James Reilly has extended an invitation to Praveen Halappananvar, widower of Savita Halappanavar (31), to meet him.

Mr Halappanavar had been seeking the meeting since June, when the Minister referred the report of the HSE investigation into her death to the Irish Medical Council and the Irish Nursing and Midwifery Board.

Gerard O’Donnell, solicitor for Mr Halappananvar said: “I have communicated the invitation to my client and he will come back to me with suitable possible dates. We are still anxious to know to what purpose he referred the reports to the Medical Council and Nursing Board, whether he has heard back from them and what he intends to do.”

Today is the first anniversary of Ms Halappanavar’s death at Galway University Hospital. She died of septic shock, having contracted an infection during a prolonged miscarriage.

There will be candle-lit vigils in Dublin, Cork and Galway this evening to mark the anniversary.