Analysis: Parties will try to capitalise on Yes vote

However, it will be hard to get younger voters to be enthusiastic about the election 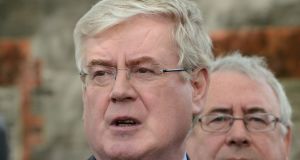 Former tánaiste Eamon Gilmore made this issue a crusade, and the Labour Party may regain some of its supporters as a result of being the most visible party during the campaign. Photograph: Alan Betson

The factors that contributed to victory for the Yes side in the same-sex marriage referendum are difficult to transfer into conventional politics.

However, the components of that high turnout had a very different complexion than in a party political election.

There is evidence that the turnout among the youngest voting cohort (those aged 18 to 24) was astoundingly high on Friday. The reason was obvious: this was a fundamental issue for them.

The campaigns by the Yes side to get younger voters to register (last September) or to get their names on the supplementary register (last month) certainly achieved its aim. It resulted in almost 100,000 newly registered voters, most of whom voted. Leaving little to chance, the Yes side mounted an energetic get-out-the-vote campaign. To appropriate its lingo, it wanted to make sure those who supported Yes online also did so offline. That meant physically going to the polling station to record their vote.

However, the Herculean task facing any political party is trying to translate that massive engagement by younger citizens into the more general political arena.

This was a campaign with a significant social media dimension. All the parties have sophisticated tools and digital ploys to reach “digital natives”. It is one thing to capture their preferred modes of communication, but it is much harder to capture their interest and loyalty when you go beyond a single, standalone, easily understood, binary option.

A neat illustration of that from last weekend was provided by the Carlow-Kilkenny byelection. There were more than 2,000 spoiled votes (one in 30 ballot papers). The reason? Those who were exercised enough to vote in the referendum but had no interest in politics.

There is no doubt that the party which will benefit most from the referendum is Labour. It was Eamon Gilmore who made this issue a crusade, and Labour was the most visible political party throughout the campaign.

The centrality of its role is sure to attract back some party supporters who drifted away for other reasons but will now feel drawn back to the party.

Among that will be promoting its stance on other social issues, particularly on abortion. While both Government parties concede that there will be no further movement in this area, you can expect the Labour Party manifesto will include a strong commitment to repeal the eighth amendment to the Constitution.

Fine Gael has undergone a Damascene conversion on this issue since Enda Kenny fell over a flowerpot when evading a question on same-sex marriage. With high-profile TDs such as Leo Varadkar and Jerry Buttimer disclosing they were gay, there has been a sea change in the party’s approach.

Similarly Sinn Féin ran a consistent campaign at a local and national level.

For Fianna Fáil, its formal support for a Yes vote was not matched by its campaigning. The party was left with some older and more conservative TDs and Senators in 2011 and few were willing to campaign for a Yes vote. Averil Power’s criticisms of the party’s failings in this regard may have been cutting and cruel, but they were accurate.