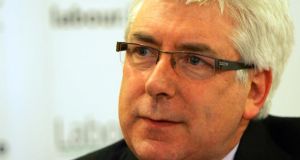 A significant increase in the minimum distance between a home and a wind power turbine would “wipe out” onshore wind projects, the Minister for Communications, Energy, and Natural Resources Alex White has said.

The Minister, whose Dublin Rathdown constituency was the subject of a canvass by a group pressing people not to vote for politicians who support onshore wind energy over the weekend, said the current 500 metre “setback distance” guidelines could be made a mandatory rule.

Efforts to reach agreement between the department of the Environment and Mr White’s department have been going on for months but are understood to be stalled.

Because of Ireland’s dispersed settlement pattern, it is considered by Mr White’s department that planning rules with a greater than 500 metre setback distance would severely impact on investment in the sector. Policy is the responsibility of Minister for the Environment Alan Kelly but he is consulting Mr White’s department as it is also an energy matter. Any eventual decision will be an all-Cabinet one.

* Other sources, such as solar, offshore wind, and biomass, were more expensive given current technologies.

Mr White said there was no evidence for the claim that wind turbines were a threat to people’s health, though it was the case that they could cause irritation and annoyance. He said he thought improvements could be made on the issues of noise and shadow flickering.

Because of the requirement for a so-called “spinning reserve”, or the provision of energy from fossil fuel sources to back up renewable ones, there was not a direct correlation between carbon emission savings and increased renewable use, but there was no doubt, the minister said, that the move to renewables reduced Ireland’s carbon emissions.

He said it was “fair enough” for people to protest but the issue of renewable energy was not just a rural issue. Reducing consumption of energy, and greater production of energy using renewables, were issues for the country as a whole.

The Protect Rural Ireland group, which canvassed Mr White’s constituency, says it is a national alliance of groups that want to unseat a number of politicians in the coming general election. The group has already canvassed in Co Laois against the Minister for Foreign Affairs, Charlie Flanagan.