The former taoiseach through the years 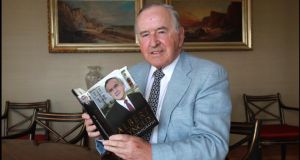 Former Taoiseach Albert Reynolds photographed with a copy of his autobiography at his home. Photograph: Brenda Fitzsimons/The Irish Times

1977: Albert Reynolds was first elected to the Dáil for Fianna Fáil in the Longford-Westmeath constituency. This followed an early career as a successful businessman.

1980: Promoted to the position of Minister for Transport.

1981: Fianna Fáil is out of power and Fine Gael and Labour take over.

1987: He takes up the post of Minister for Industry and Commerce, but Fianna Fáil is soon out of office again.

1988: He becomes Minister for Finance under taoiseach Charles Haughey.

1991: Sacked by taoiseach Charles Haughey for supporting a failed motion of no confidence in his party leader.

The Fianna Fáil/PD Government struggles after the emergence of the divisive X Case.

1993: He signs the Downing Street Declaration with then British prime minister John Major.

1994: The IRA goes on ceasefire for the first time. However, the Government collapsed in November.

Decisions such as the reappointment of Harry Whelehan as attorney general and the handling of the case of Fr Brendan Smyth had prompted tensions with the Labour Party.

2002: He retires from active politics.

He was succeeded by Bertie Ahern as Fianna Fáil leader.