Minister for the Environment has ‘open-door policy’, says spokesman 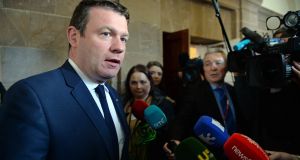 Outgoing Minister for the Environment Alan Kelly does not regret meeting representatives of a company that was bidding for a State contract, a spokesman for the Minister has said.

Bartra Capital is one of 25 companies competing to build social housing and lease it back to the State.

According to a report in the Sunday Times the meeting on October 7th in Leinster House involved Mr Kelly, Bartra Capital chief executive Mike Flannery, two officials from the Department of the Environment and Mr Flannery. The report said the meeting took place against the advice of senior officials in the department.

A spokesman for Mr Kelly said there was nothing unusual in the Minister meeting people interested in providing housing. “The Minister has had an open-door policy with groups interested in greater investment in social housing.”

Mr Kelly had frequently held meetings with approved housing bodies, he said. “He has held numerous meetings with housing organisations of various types – including the Peter McVerry Trust, Focus Ireland, Respond and many others who do business with the State in developing housing and related services. In fact, he would be criticised for not holding meetings with groups seeking investment in social housing,” he said.

Mr Kelly’s meetings had not been confined to charities or voluntary housing groups, the spokesman said.

“He has also met with credit unions and other potential large-scale investors. The experience of these groups will be essential to the development of schemes such as affordable rental programmes and to bring about mixed-use developments combining private and social houses together.”Any suggestion that the meeting with Bartra was secret or private was not correct, he said.

“The description of the meeting as private is not accurate, as the details of the meeting were recorded in the official diary with department officials in attendance and all of this was made public through FOI [Freedom of Information] and through Bartra’s lobbying register.”

He added that it was not the Minister or the department who signed contracts with developers to build social housing. “This is usually done via local authorities or voluntary housing bodies,” he said.