After all the blows, Fine Gael is still standing tall 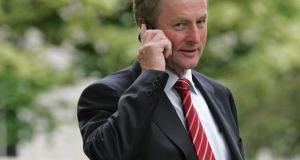 Fine Gael leader Enda Kenny who has managed to guide his party through five years of government to come out of the 31st Dáil with almost the same level of support it had going in. Photograph: Eric Luke/The Irish Times

It’s the smaller party in an outgoing coalition that usually gets the electoral lash but it is very rare for the bigger party to escape without receiving a few deep welts on its back.

True to form, Fine Gael picked up a fair number of blows over the past five years. Yet, it looks like coming out of the 31st Dáil with almost the same level of support it had going in.

That is some achievement considering it lost all the early battles with the Troika over burning bondholders and promised more than it delivered in its negotiations with our international lenders.

Five of its deputies went overboard during the Government’s term. It lost another two Fine Gael seats in by-elections (for vacancies left by EU Commissioner Phil Hogan and MEP Brian Hayes).

One of the centrepieces of the party’s manifesto, the abolition of Seanad Éireann, backfired spectacularly.

Moreover, the three strongest defenders of Enda Kenny during the leadership tussle in 2010 created some of the biggest headaches for the Coalition during its term of office.

Hogan, as the minister for the environment, bequeathed to the Government the household charge and Irish Water before his departure for Europe.

His adept handling of the abortion legislation in 2013 did not save him from a reshuffle in June 2014.

Alan Shatter was a reforming minister for justice but his headstrong take-no-prisoners nature caused one political shemozzle too many. He was replaced in April 2014 by the more emollient Frances Fitzgerald.

The party has been self-confident enough and focused enough to take all those hits and still stand tall.

Its two most important figures were experienced enough, sufficiently relaxed, and replete with self-confidence.

Enda Kenny, underestimated and written off during much of his career, eased into the role of Taoiseach.

Michael Noonan carved out a powerful fiefdom for himself (along with Labour’s Brendan Howlin) in Merrion Street. His great attributes as Minister for Finance were his communication skills, his political instincts, and the air of calm assurance he radiated.

He had a few failures (including the deal that never was on easing the debt burden) but was able to gloss over them with silken prose straight out of John B Keane.

Kenny surpassed expectations too. Here was a politician who narrowly survived a coup in 2010. That was the making of him because it (almost) united the party.

He was big enough to bring key members of the opposing camp (Leo Varadkar, Simon Coveney and Charlie Flanagan) back in the fold. Not a syllable of dissent has been uttered since then.

The departure of Denis Naughten, Lucinda Creighton and three other TDs represented a blow. But the party was big enough to sustain it.

Indeed, its many failures to meet non-economic targets seem to have done Fine Gael little harm, unlike the junior partner which has been hammered for even the smallest failures.

It has been the party which highlighted job creation most and it has received most of the kudos.

The growing economy has allowed it latitude to reduce taxes (this is always a big-ticket electoral item for Fine Gael). Kenny’s recent ploy to offer TDs and senators a free vote on the abortion issue reflected Fine Gael moving into the space once occupied by Fianna Fáil, that of a populist catch-all party that is seen as the natural party of government.