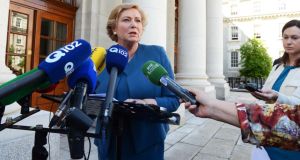 Minister for Justice Frances Fitzgerald has highlighted the ‘scourge’ of human trafficking in Ireland and said action will be taken to help exploited women. Photograph: Eric Luke / The Irish Times

Minister for Justice Frances Fitzgerald has highlighted the “scourge” of human trafficking in Ireland and said action will be taken to help exploited women.

Ms Fitzgerald met with the EU’s anti-trafficking co-ordinator Dr Myria Vassiliadou in Dublin this morning and the pair discussed the need to “reduce demand”for prostitution at European level.

“What we need to highlight is there are trafficked women in Ireland and they are involved in prostitution in this country and are very exploited,” Ms Fitzgerald said.

“We need to take many different actions to reduce demand and to help the women who are being exploited in this country, who have been trafficked. It’s about following the money and reducing the demand.”

Speaking on her way into the Cabinet meeting, the Minister accused criminal gangs of exploiting women. “We also need to heighten public awareness of the women who are being moved to towns around Ireland, some of them are being trafficked,” she added.

Ms Fitzgerald said a new sexual offences Bill being brought to the Dáil this session would be examined to see if anti-trafficking laws needed to be strengthened.

The meeting with Dr Vassiliadou comes ahead of EU anti-trafficking day on Saturday week [October 18th].

“Our capacity to work at both a national and international level on targeted intelligence led operations and to ‘follow the money’ was discussed with Dr Vassiliadou,” Ms Fitzgerald confirmed afterwards.

“Continued targeting of criminals at the higher end of the trafficking chain is a challenge we must work on with on international partners,” she said.

She said victims of trafficking were often extremely vulnerable. Investigations that focused on gathering evidence in relation to issues such as finances reduced the burden on victims as the only source of evidence against traffickers.

“As well as focusing on bringing to justice those who engage in this most heinous crime, we must also take steps to reduce the demand for the services of victims of trafficking.

“If the demand for the services of victims can be reduced, and hopefully eliminated, the business model of trafficking can be significantly undermined.”

Dr Vassiliadou said she was pleased Ms Fitzgerald “ shares our passion” to fight traffickers and protect their victims. She added: “Tackling the demand for the services of trafficking victims is key to our fight against this crime and I was pleased to hear the Minister place such emphasis on this.”