Abortion law finally enacted, but next stage in 30-year saga will be played out in courts

President’s decision did not come as a surprise 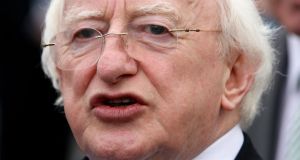 President Michael D Higgins’s signature on the Protection of Life During Pregnancy Bill yesterday, formally brings to an end a key part of the debate that began with the so-called “pro-life amendment” in 1983.

Thirty years after the 1983 referendum set off one of the most acrimonious legal and political sagas since the State was founded – one that led to a landmark Supreme Court decision, four more referendums, a European court judgment and decades of bitter debate – Ireland now has a law providing for abortion for the first time.

The wider debate will no doubt continue for years to come, but President Michael D Higgins’s signature on the official vellum version of the Protection of Life During Pregnancy Bill, confirmed by Áras an Uachtaráin yesterday, formally brings to an end a key part of the debate that began with the so-called “pro-life amendment” in 1983 and came into sharp relief with the case of Miss X, the 14-year-old suicidal rape victim who, in 1992, was taken to court by the State to prevent her from travelling to the UK for an abortion.

In the end, the President’s decision not to refer the Bill to the Supreme Court to test its constitutionality didn’t come as a surprise to people involved in the process.

It became clear during
Monday’s meeting of the Council of State that the dominant (though not unanimous) view around the table was that Mr Higgins should sign it rather than send it to the Supreme Court to test its constitutionality.

This was the clear impression given by the Government side, as well as a majority of the current and former office-holders who sit on the council. For Mr Higgins to have gone against the advice of Government, judiciary and other key groups would have been a huge surprise.

Governments tend to argue against referral at Council of State meetings unless a Bill is such that the consequences of a future rejection by the Supreme Court would cause major practical problems.

That would be the case with a law on adoption, for example, or a law that gave election results legal standing. The spectre of a future court invalidating election results or finding that children had been unlawfully adopted would make the idea of putting a Bill beyond legal challenge – as happens when the Supreme Court upholds a law on referral from the president – very attractive.

This Bill didn’t fit into that category. While the Government was by definition satisfied that the legislation was constitutional, it would rather take its chances with a future legal challenge over the inherently more unpredictable process of a referral to the Supreme Court, where, in the words of one legal source, “you’re basically asking judges for their opinion”.

Moreover, the political cost of a rejection next month would be far greater than a rejection in two years’ time.

Judges have traditionally shown little enthusiasm for the referral process either. The former Supreme Court judge Hugh O’Flaherty recently pointed out that the procedure works best where there is a net point to be decided; where the answer is yes or no.

Having to grapple with the complex abortion Bill without any concrete case before them and to produce a single judgment within 60 days would be “a nightmare scenario” for the court, he suggested.

Appeal of a referral

For some supporters of the Bill, the appeal of a referral lay in the fact that the constitutional seal of approval from the Supreme Court would have made the law immune from further challenge. But opinion is divided on this.

It removes doubt, yes, but many lawyers and politicians feel the rule freezes laws that should be open to revision as circumstances and attitudes change over time. At Monday’s meeting, this argument for referral didn’t win much support.

As a result, one thing is certain: at some point in the months or years ahead, the abortion Bill will be challenged and challenged again. Some of the most significant moments in this long debate have been played out in the Four Courts. And that’s where it’s bound to return.