Politicians ‘have responsibility’ to legislate on abortion issue 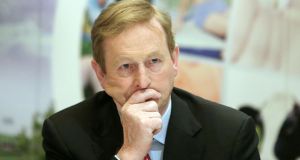 Taoiseach Enda Kenny has said he has told the Catholic Church’s most senior representative in Ireland Cardinal Sean Brady that politicians have a duty and responsibility to legislate for limited abortion.

“Everybody’s entitled to their opinion here but as explained to the Cardinal and members of the church my book is the constitution and the constitution is determined by the people. That’s the people’s book. We live in a Republic and I have a duty and responsibility as head of Government to legislate in respect of what the people’s wishes are,” Mr Kenny said.

Mr Kenny was speaking at Knock Airport today, where he was accompanied by his party and constituency colleague John O’Mahony, who is one of the Fine Gael backbenchers with strongest concerns about the legislation.

The Taoiseach said the people’s wishes had been determined and set out by the Supreme Court, which determined what the Constitution actually meant.

“People have given their views on this already but it’s now a process that we’ve entered into as a legislature and that’s our responsibility in this Republic,” he said.

“It is time to bring clarity and certainty to it. It is time to recognise that we’ve gone on now for 30 years without any regulation without any professionalism involved in this area and that’s what this is all about.”

“There is no change on the abortion legislation as applies in Ireland but it is time to bring clarity and certainty to it and I hope that that can be achieved now in an even and a considered fashion.”

The Catholic bishops said they were concerned that hospitals could be forced to provide abortion and that there was no room for conscientious objection at an institutional level.

“This would be totally unacceptable and has serious implications for the existing legal and Constitutional arrangements that respect the legitimate autonomy and religious ethos of faith-based institutions,” the Catholic Bishops said in a statement.

They also denounced the argument that abortion should be legislated for in the case of a pregnant women with suicide ideation.

Coronavirus on G20 agenda as China reports uptick in cases 06:52
Coronavirus: Protesters attack bus carrying evacuees in Ukraine 06:36
Ires doubles down on building plan, Dr Pepper for Kildare, and staycations for all 06:30
Cian Healy’s hunger for battle undiminished by the years 06:00
Railway looking to build on their European experience 06:00