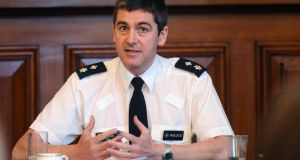 The PSNI is “quietly optimistic” that protests planned before the G8 summit in Co Fermanagh will be peaceful.

Chief Supt Alan McCrum, outlining plans for policing two large demonstrations, said 24-hour police protection would be mounted at key buildings in and around Belfast before the G8 meets next Monday and Tuesday. Outlets of large US-linked corporations would also receive greater levels of protection.

City Hall and Stormont’s parliament buildings will get high-visibility protection, while the offices of Citibank, the New York Stock Exchange and outlets such as Starbucks and McDonald’s will also come under surveillance.

Queen’s University has already said its public buildings will close this coming weekend in a bid to ensure the safety of the university estate.

“These are simply precautionary measures to give us confidence and to reassure the community that Belfast is a safe place and is very much open for business over the next number of days,” said Chief Supt McCrum.

Police are anxious that peaceful demonstrations by trade unions, environmental groups and other activists will be properly accommodated in Belfast on Saturday. Two demonstrations are planned with an estimated 5,000 expected at each.

The Irish Congress of Trade Unions has called for a noisy but dignified and peaceful demonstration on Saturday which will leave Custom House Square in the docks area for City Hall for a rally.

Enhanced security plans will come into force over the coming days with extra security around Belfast International Airport in Co Antrim, where the G8 leaders and the delegations will arrive.

The air corridor to Fermanagh will be closed in the early hours of Monday and again late on Tuesday, as will sections of Lough Erne near the golf resort where the summit is being hosted. The PSNI’s 7,000 officers are being supported by an extra 3,600 officers from British forces and others farther afield.

Some 900 gardaí will be deployed in Border counties.